This week, a crew from Blue Ridge TimberRights returned to work on setting the timbers for the porch roofs.  It’s hard to tell much yet, but here is a photo on the backside.  They have not moved around to the front side yet.  Afternoon thunderstorms continue to blow through interrupting some of their work. 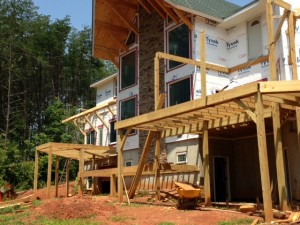 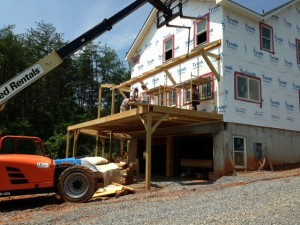 Here the porches are forming over the garage and outside of the Breakfast Room.

Inside, my plumber  has been sweating and toiling over drilling 21 holes to run pipe. He has been procrastinating about this run since he realized this was the only route short of burning a hole in the main support steel beam. Each hole has to be 1/8 th inch lower than the previous for a straight run downhill for the waste drainage. Using a template, Jack has drilled hole after hole. 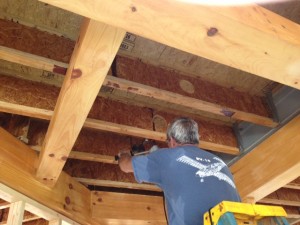 The hole drill is an arm-breaking exercise. Don’t challenge him in arm wrestling anytime soon. He’s strong and will win!

I got on the ladder and looked through to see that these holes are perfectly aligned.

A crew from Audiotronics is starting to install the central vacuum system. Now we are talking!  This is a hide-a-hose system that will have 50-foot retractable hoses in 5 locations throughout the house and a toe dustpan for swept dirt in the kitchen! 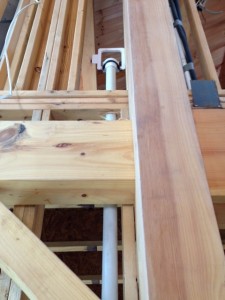 Here is a chase for a vacuum outlet

Besides sorting through flooring estimates, trim carpenter quotes, and checking in on Mom (who has been ill this week ), I have been putting in more and more hours in my job with Va Tech position writing curriculum and presentations, consulting with Extension Agents and having meetings.  In between, I have been installing a few door knobs and picking up after messy work crews, including my sweet plumber. 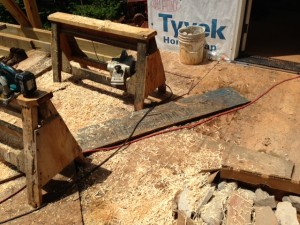 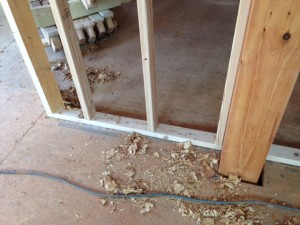 I realize it is a house under construction, but I keep picking up since we have so many stop-by visitors.  It reminds me of an old comedy sketch (but I can’t remember the name of the comedian) who said his mother moved about the house picking up other people’s messes muttering “I’m not your maid.”  When a friend came to the house, they asked who that woman was and he said, “I don’t know but it’s not the maid.” That’s how I feel when water and Gatorade bottles are scattered, nails dropped spuriously, wood shavings scattered, parts and tools are left about.  I guess that’s part of my job but I must admit that it amazes me the (unsafe) mess a crew can generate. 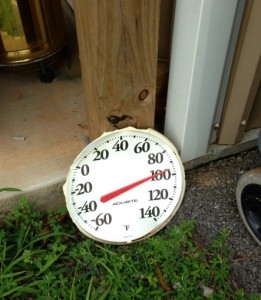 Each night, to stay cool, we plan a little field trip. Sometimes we just go to the grocery store and hang out near the freezer section.  Last night we went to see the movie with Sandra Bulloock called “The Heat,” which my sister in law thought was a funny title for us battling no Air Conditioning.  It was hilarious!

The plumber is off next week flying the Pietenpol to Brodhead, Wisconsin for a much needed rest and camping with friends. Hopefully by next week, the porches will be done and the electrician will be ready to begin!

PS. Thanks to Ted DeBord who found the name of the comedian (Fred Wolf).

How did these two overachievers find one another?

Sounds like your "sweet" plumber is going to be VERY skinny when this job is done!(From all the sweating) I know you do your best to keep him fed! I realize we aren't very convenient as far as distance from you....but.....if you ever just want to come over and stay with us in the air conditioning....you're very welcome to join us!!! (Although I'm sure you find very amusing people to chat with at the grocery store! :)

Oh yes, the grocery store brings many amusing people as does a cool theatre! We may be over soon if this heat continues!

I hope that means you will be at sml sometime soon!

One year ago today we broke ground on this project. We'd be moving in now if Stellar One Bank hadn't screwed us over on the construction loan. Now it will likely be October...