Do you sometimes feel the rain is happening just because it is inconvenient for you? Last year when I started this blog, I noted the seemingly endless rain occurring when we were trying to dig the foundation. And this year, reports are saying that this is the wettest year on record.

Maybe it is because Jack is plumbing; and plumbing is for water preparation and maybe once he is through, it will stop raining? Or is that wishful thinking?!

I adore Jack and he’s a smart, loving, wonderful guy but he is a tad slow on the plumbing. Recall, last week, I wanted to blog (and brag) about his plumbing. But he had to redo the same bathrooms three times to suit the pre-inspection, and has just completed the 4th of the 7 bathroom drain waste systems and has yet to start the supply systems.  I am not going to fire the plumber!  Because, after that, he becomes our electrician! Any readers, who want to pull wire the last of July or first week of August, please contact us! He will be flying to Brodhead, WI On or around July 23rd for a Stinky Smelly Boys camping week with Pietenpol pilot friends. Thanks Susan Hofmann for that SSB analogy!

While looking back at those rainy photos from last year, I saw I had included our grand daughter, Destiny, who had helped lay out the footers.  She was much younger (at 7 years old) in those photos.  This year, Destiny is 8 (of course!) and has been here for Bible School at Bethlehem UMC.

Since she has been here, we have had a great time first breaking in my sister’s new house at Smith Mountain Lake (See http://browncrawford.wordpress.com/). But we have also we have floated off Nancy’s dock where Alison helped her be comfortable on a float noodle in deep water. We went on a cool boat ride (Thanks Koontzs), and she has been to an Elephant Show at the really nice Salem Fair and enjoyed a petting zoo there.

Not only that, but since she got taller, she outgrew the bike we keep at the airport for her. So, without even asking, she got a new bike. She asked me if I gave it to her ” for a reason.”  I replied, “Nope, just because I am the Gramma and I can decide!”  Today she has a play date with our number one blog commenter, Marion and her grand daughter, Sutton. 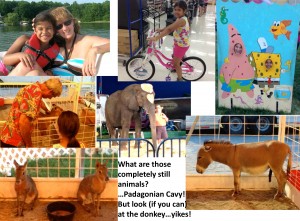 Thank-you God for allowing us to be Grandparents, but could you let us a bit on the rain? Love, Karen

Great pictures and blog today, we had fun on the boat with you. We are hoping the rain finishes up soon. Chance of rain is much lower tomorrow.

Personally, I think the plumber should be fired. The dumb SOB obviously doesn't know what he's doing. I hope the electrician is better.

Most plumbers have helpers! Glad you are taking some time to enjoy the summer. Hope the rain lets up a little.

Well.....I agree that the "plumber" is far too cute to fire.....but.....I hope he gets the job done soon so the electrician can start! I, for one, am getting VERY anxious to come to the B & B for some R & R very soon! :) Sutton had such a WONDERFUL time with Destiny last week. She continued to talk about her all the way back to Maryland when I drove her home on Saturday. New BFF's.....as they say! :)