Birds & Bees at Bedford Landings B & B

Posted on April 4, 2015 by Bedfordlandings

I don’t really need to explain about the birds &  bees to you, but yet I do! See, at Bedford Landings B & B, we have some bird & bee issues.

Bird and Bee issue one:
Last spring, I blogged about an annoying bluebird issue. The bird kept slamming his beautiful little body against our windows. This spring, the bluebirds are at it again.  Apparently bluebirds are very territorial. He is attacking what he sees as another bird in the window reflection. Short of plastering black paper on the OUTSIDE of the window, I can’t get the little bluebird to stop. I taped scary falcon silhouettes on the window (thank you wildlife specialist friend for that bit of advice which didn’t work). The falcons are not scary to them at all so after the wind dies down a bit today, I am going to have to move the bluebird box further from the house. It will save their little bruised bodies! 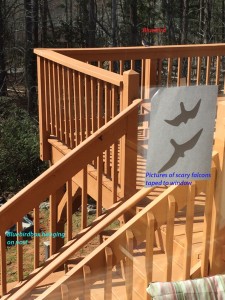 This photo shows the proximity of the bluebird box to the windows, the bluebird standing guard, and the scary falcon silhouettes.

It’s not just the birds at Bedford Landings, but the bees are at it. Jack drove to North Carolina yesterday to get three new nuclei of bees. After a three hour ride buzzing about in a cardboard box, they were hopping mad once he got home with them and placed them in their freshly painted bee boxes. We have one hive already and we are adding three more hives as people who visit Bedford Landings love our honey! 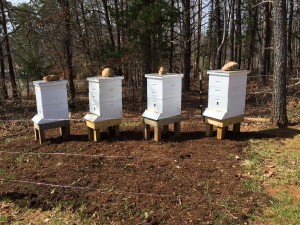 So to entertain the birds & bees at Bedford Landings B & B, we thought we would build them a play space! We are installing a water feature and future guests are gonna’ love it! In the photo, you can see it is a work in progress but I hope to update readers with a picture of the completed feature by next week!

Norman Tharpe at Water Garden Designs is the craftsman who has the vision of what this shall be.  I have gained a respect for his craftsmanship and I am impressed with his work and his workers. They diligently have been stacking rock for the walls. 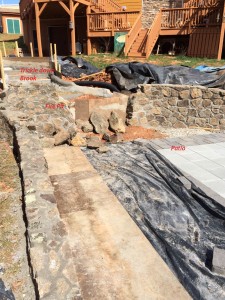 There will be a trickle down brook (as I have labeled in the photo) to a pool of water with a fire pit on the left. Birds & bees alike will love the water feature (except when there is a fire)!  The square tiles in the center of the patio will be stained in contrasting colors to make a chessboard to host our giant chess pieces. Give Norman a call if you are considering such a feature. Or message us if you want a reference about their work. Water Garden Designs 434.824.8619.

Two announcements next…you will want to know about this.

The Jewel of the Blueridge is the reference for Smith Mountain Lake and many people are busy planning special events for the 50th Anniversary of the lake. And it’s on my birthday (March 7Th) that the lake became full pond (I was 12). A catchy little tune has been written about the “jewel” and I have linked it on our page. Kudos to Jerry Hale for his talent in writing this song!

Lastly, on June 13, the SML airport, in partnership with the Smith Mountain Lake Christian Academy are hosting a fly-in at the Airport. You can drive in or fly-in to learn more about planes, get a plane ride, grab lunch, see drones or take a turn in a flight simulator. Activities are scheduled between 11 and 3 on June 13th.  Each activity will have a fee to support the Academy but there will also be free fellowship, photo ops and things to see! Mark it on your calendars!

Come see what we are doing at Bedford Landings!  There is always something going on! And tell us…What are your birds & bees up to this spring?

Maybe the bees were mad being kidnapped across state lines!

We would love to attend the June 13 fly-in at the airport, but that's the date of our grandson's graduation. So we'll hope to see your new water feature and fire pit later!