We are sure enjoying Smith Mountain Lake and all of the 50th Anniversary events! We have been busy not only with the B & B the past few weeks, but with preparing for and attending fun events that would not want to miss!

Three weeks ago, we had an exhibit at the Business Expo telling folks about the B & B and Jack’s new Air Tours business. He gives sightseeing rides in his airplane over the lake. 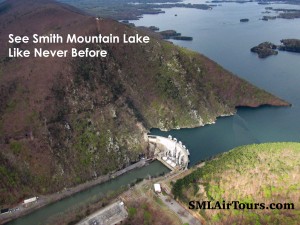 Two weeks ago was “60’s weekend.” We went to the New Crusty Minstrels performance, which was a “bring your own picnic dinner and sing along-type of concert.” We danced and sang along to “American Pie,” “Under the Boardwalk” and many other 60’s favorites! 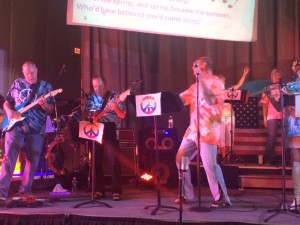 Jerry & Ferne Hale on flute and guitar for Crusty concert.

The next day, we helped host the “Wings and Wheels” fly-in featuring classic cars, antique planes and quilts held at the Smith Mountain Lake Airport. It was another anniversary event and was a free & family friendly. However, we took in donations in exchange for a ballot to vote for best of show for cars, planes and quilts.  Yes, Jack’s Pietenpol air camper won best of show for planes. Awardees received hand carved wooden plaques. 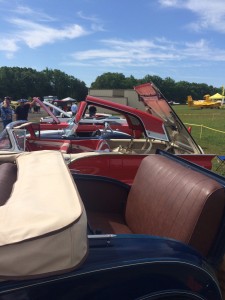 Some of the classic cars on display

Through the best in show donations, we collected $201 to contribute to a fund affectionately called Vicki’s Vision fund. Now the fund raising effort has become incorporated and is called  Smith Mountain Lake Center, Inc. with the purpose of raising funds to build a multi-purpose civic facility to supplement lake venues.

This past week, we held a Chamber of Commerce ribbon cutting to officially introduce Bedford Landings Air Tours. Thanks to members who came out on a cold and rainy day for a chicken salad croissant!!

This weekend, it was another 50th Anniversary event. We truly enjoyed a delightful evening with the Roanoke Symphony Orchestra (RSO).  Maestro, David Stewart Wiley composed an anniversary song especially for Smith Mountain Lake. Entitled Golden Fanfare for the Lake, it was such a relaxing and lovely piece!  There was also a song they shared from the movie (about SML) entitled Lake Effects. This song from the movie, “Concentric Circles,” was on a CD that we purchased entitled Full Circle.  It sounds as if it will make good breakfast music for us.

In a few weeks, we will be performing the Lakeside Singer’s Concert June 3 and 4.  Jack and I are both singing and he is the featured “whistler” in a few songs. He actually has a very strong whistle!  All of the songs are water or lake related.  It is shaping up to be a really good show!

We really want to enter a boat in the Cardboard Boat Regatta being held at the SML 4-H center. We must find time to design and build it though!

Check out the other numerous events coming up this summer at Smith Mountain Lake.  And if you need a place to stay…Bedford Landings B & B!

Jack's Air Tours business really does what it promises. What a terrific view of the dam! Photo taken on the sight-seeing ride, I assume. Can hardly wait to take a ride myself.