All in a Day’s Work

Yesterday, all I wanted was a beautiful new green roof.  And I got it!

What I didn’t count on were a few more headaches. First, Cindy from Smith Mountain Building Supply told me that the windows and front door needed more work to be fully installed or else their warranty may be voided.  Those windows are trying to cause me a problem!  Then the roofers had to knock a foot of rock off the chimney since the stonemasons hadn’t flashed the chimney. And the stonemason wanted to charge us more to get back up there to re-stone it.  I would have thought someone who works on chimneys would know it requires flashing!

When I am upset, I tend to clean.  Does anyone else do that?  After cleaning up some messes in the upstairs construction area I decided to go to pick-up the joist hangars at Capps since Jack needed them to work on the upper deck.  He and Steve are shown here working while I was trying to take photos of the partially completed roofing. There are not actually decking boards down yet (which is good since the roofers were throwing off stone) so they are working off plywood. 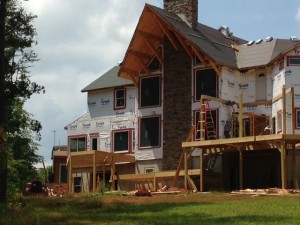 After my therapeutic cleaning, I took a shower and planned to go to get the joist hangars.  Stephanie (our next door neighbor who is married to Steve, Jack’s trusty helper) stopped by to try to lift my spirits. That’s when we saw Steve with a towel wrapped around his wrist.  I didn’t see it, but apparently the ladder slid one way and he slid down the post with his arms wrapped around, to not fall off the deck.  You can see from the photo the drop!  A visit to emergency care and 10 stitches later, he WON’T be helping out today! 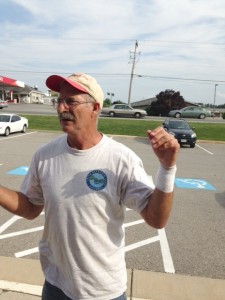 But we got a roof and can you believe what hard workers to get that done in a day!! Thank-you Daryl Byrd and Reliant Roofing!

Another bright spot was that a bright yellow house flag arrived in the mail from Gardenhouse flags. It was designed by Sue Timmins.  Sue is a Facebook friend who I met through the movie Wish You Well.  She is an artist and we will be proud to fly this gorgeous flag  once we have a full deck to fly it from !  I blogged about when Jack and I were extras in the movie.  It’s not out yet but hopefully this fall it will be!  Sue’s daughter is the producer! 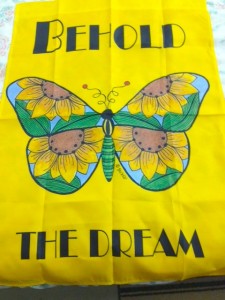 So except for the miffs and stitches, we are thankful to be truly dried in and have a sunny (flag) spot in our day.  Steve, we hope you heal quickly!!

Wow! What a day you had! I am impressed you got the roof in one day. Ours took two, and it is not as big! Beautiful, cheery flag! Can't wait to see it flying in the breeze on the deck!

Bedford Landings Blog A Bandaid for Moral Support on August 22, 2013

[...] Bill was our second injury on the worksite (the first injury). He somehow hit himself in the head with a saw. That could have been much worse than a bandaid. We [...]