Posted on January 10, 2016 by Bedfordlandings

Not wanting to sound ungrateful for the extended warm season this year, BUT, the winter months can be long and gray.  In trying to overcome Winter at Bedford Landings, we have brought in some visions of summer in the form of art.

Artist in the House
The artist who’s work is on display this month is Dana Phillips.  Dana moved to the lake from northern California after having been raised in Texas. Previously a lawyer in southern California, he expanded his talents and now paints landscapes and other figures with many scenes from our lovely Blue Ridge Mountains and Smith Mountain Lake.  Bedford Landings is pleased to host these works.  If you would like to come by the see them just email Karen for a time to stop by. 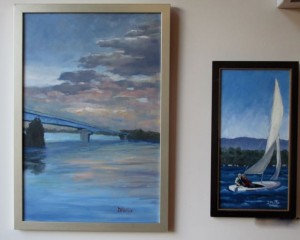 Murder Mystery
Another way we are chasing away winter at Bedford Landings is to plan something fun!  And we are planning an evening that will be a Murder Mystery.  We attended one in September and decided this would be great for folks living at and visiting the lake.  Our Murder Mystery event is planned for March 5. We have space for 40 to play, eat, drink and be merry!  Get your tickets now!

Many who have stayed at Bedford Landings have been greeted by our peke-poo, Kramer.  Kramer is now 18 years old, deaf, and somewhat demented.  He sometimes stands in a corner lost, he whines with his arthritis at nap time and in the night before settling down. He sleeps about 22 hours a day, and takes Rimadyl for the pain.  Poor guy.  But then other times, he brings his stuffed squirrel for us to throw and bounds in the door as if he was a puppy.  He still eats well but he wears a diaper for incontinence. Since he is a black dog, he doesn’t take a very distinct photo, but are some I have taken overtime.  I won’t post his photo in his diaper.  The sweet dog does have some dignity! 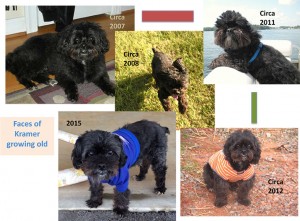 Don’t be Blue
Wherever you are, if you are chasing away the winter blues, remember that it is just a few months, make a nice cup of tea or hot chocolate, pick up a good book (we are loving reading the “Outlander” series), plan a movie night or game night with friends. Write a real letter in long hand to an old friend, paint on canvas, get one of those lovely new adult coloring books, dust off your sewing machine or table saw, plan a little vacation, build a fire, tune up your bicycle, clean up your workbench, give away clothes that you never wear and un-used cookware to a charity, learn to knit, refinish some furniture, feed the birds, or experiment with a recipe.  Below is one of our favorites you can try! We are  chasing away the Winter Blues at Bedford Landings.  How about in you? 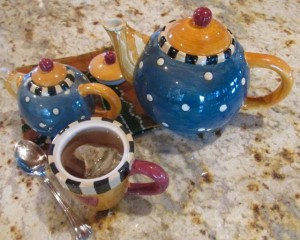 Comfy blog. Do you offer warm slippers and s'mores? I'm in!!