Time in a Bottle

Posted on September 5, 2013 by Bedfordlandings

This week, I assembled a time capsule to put into the wall.  I am not sure which wall put it in, and it’s not like there is going to be millions of dollars hidden in the walls; just this and that.  Photo (minus my cell phone) shows that I included business cards, information about Bedford Landings, family photos, food labels, a record player stylus, a pedometer, etc.

I just hope that the RAT doesn’t carry off the time capsule!  I set a mouse trap since I saw mouse droppings in a corner of the stairwell by the garage.  Granted, the house is open and being such a fine house, if I were a rat, I would move in too, but  there is not food in the house.  Maybe it likes the glue in the trusses.  But I loaded peanut butter on a trap and this monster ate the bait, but didn’t spring the trap.  Then defiantly, left more droppings by the trap.  I’ll get you “my pretty!” 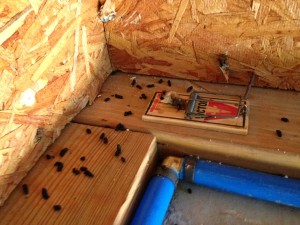 Jack left Wednesday for Wisconsin to retrieve the plane which he abandoned after the Brown Recluse attacked him in July.  That little plane will take 17 hours to get him back. He is watching the weather anticipating getting home this weekend. 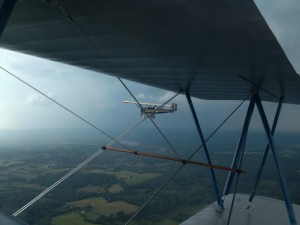 This was taken in July by a friend who flew in his plane with Jack to Wisconsin.

Before he left, he had a surge of wiring work and framing.  He and Steve framed out the ceilings in the Master bedroom and sunroom including the Tray Ceiling.

Pro-Siding (and Charlie English and happy crew) are working steadily along on the exterior this week.  They are from Rocky Mount, VA and we sure like their work and attitude! 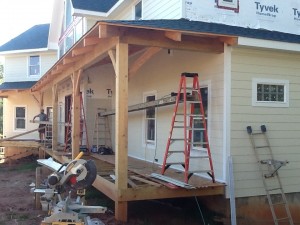 The color is Navajo Beige.

We have had a few calls wanting to make reservations and we appreciate your calling, but I hesitate to make any reservations in 2013.  Once we start moving in, and get settled, though, we will be ready to open Bedford Landings!  The we can all celebrate!  Until next week, enjoy the lovely Fall weather!

What about adding one of Jack's tools to the time capsule. I'm sure he has duplicates. Or a piece of wire or pvc or scrap wood? A hat? Something that was used in the building of the house!

Hey.........That's a pretty smart mouse you've got there. And, by the way, he's eating something somewhere, somehow....lots of droppings for just one mouse. Maybe he had friends or family with him and one held the spring up while they all took turns eating the peanut butter. I LOVE a good mystery! OH, nice siding by the way..... :)

Will let you know if We catch the mouse!