Posted on March 8, 2013 by Bedfordlandings

Usually Karen does the posts, but Jack is posting today.  This is an email he sent to non-facebook users. He outlines more technical aspects.

Today we began raising the timberframe for our house/bed & breakfast.  In the central part of the house there are four “bents”, that separate the space into 3 bays.  We got 3 of the 4 bents erected today.  Tomorrow we’ll get the fourth bent in place, then finish inter-connecting them with girders and purlins.  All joints are standard wood joinery (primarily mortise and tenon joints – see: http://en.wikipedia.org/wiki/Mortise_and_tenon) pinned together with 1” diameter oaken pegs.  The timbers are Eastern White Pine from an old-growth forest in the Appalachian mountains of northern Georgia.  Most are 8”x10” but some are larger, ranging up to 10” x 12” for some of the posts and 8” x 16” for some of the girders.

Here are some pictures: 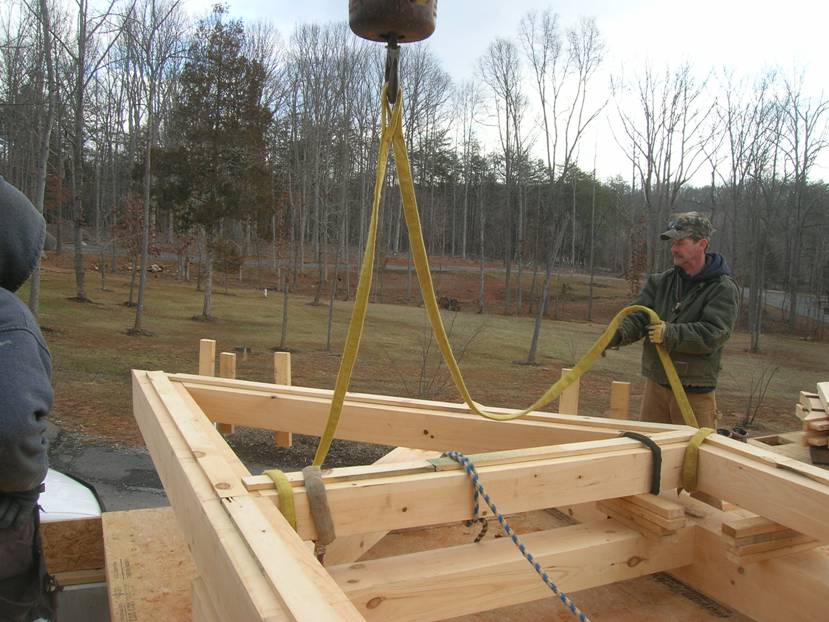 In this picture, the first bent is being prepared for raising.  This bent frames the fireplace so it was actually raised in two pieces – the stone fireplace and chimney will fit in between the two halves of this bent. 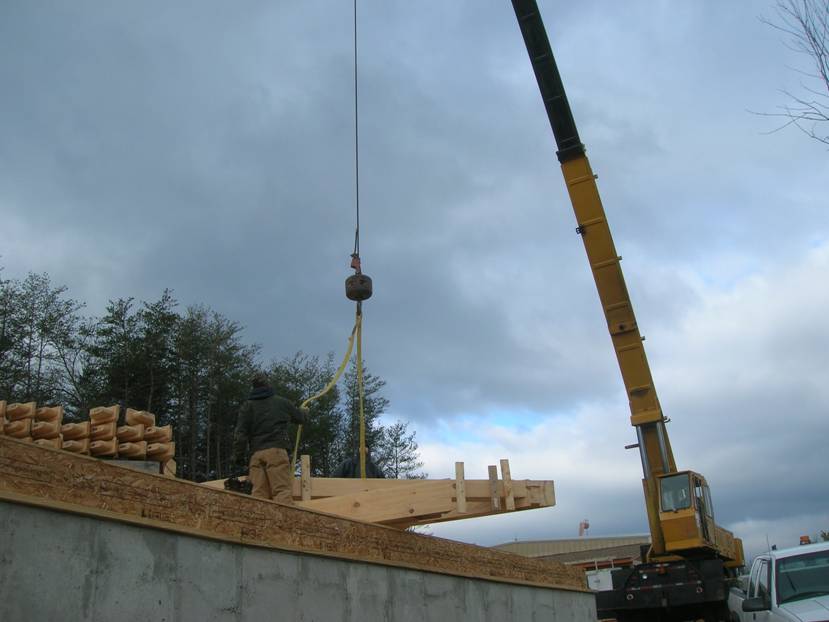 Here you can see the size of the crane (45-ton) that was used to raise the frame and set it in place. 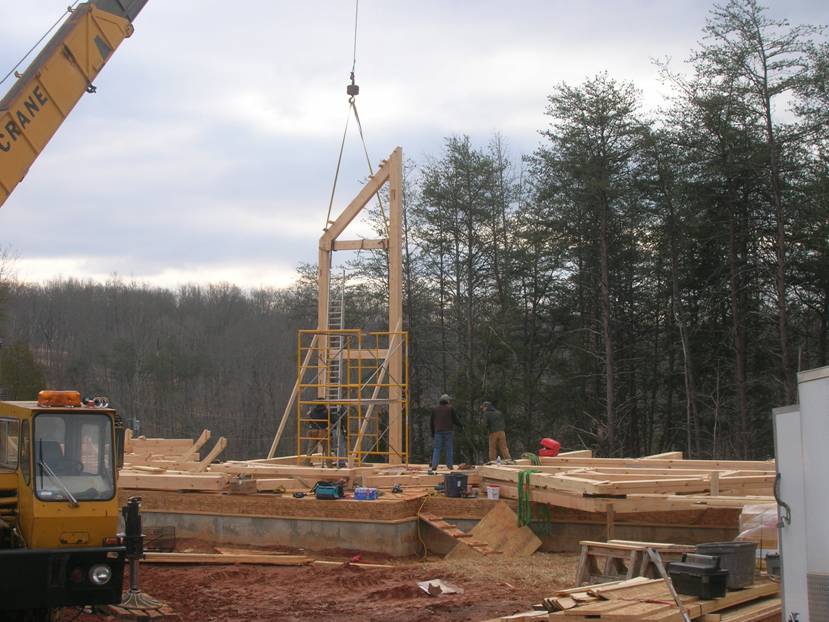 The first half of this bent is in place with the posts seated in the pockets made into the floor system to receive it.  The crew is bracing it with 2×6’s screwed to cleats on the floor. 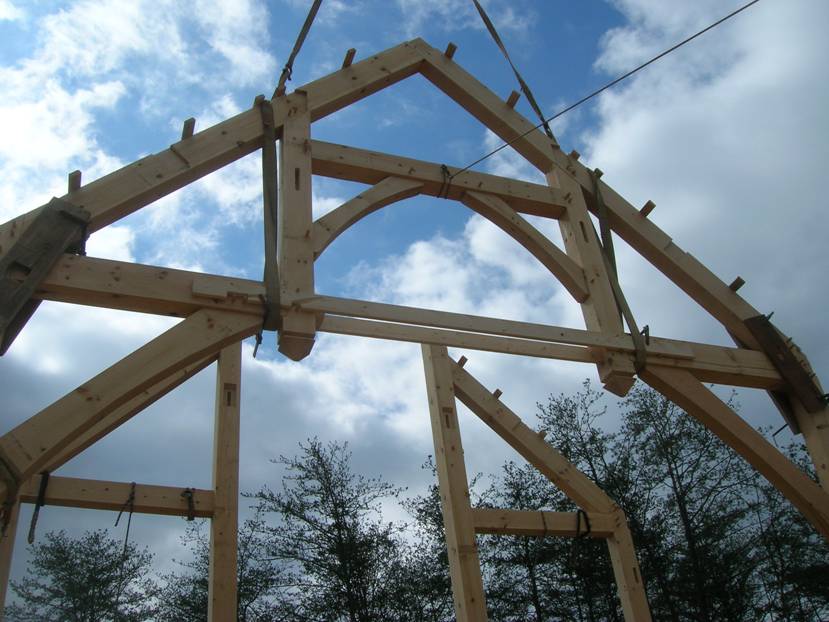 Then we raised the second bent, which has a “Hammer Beam” truss in it (see:  http://en.wikipedia.org/wiki/Hammerbeam_roof) .  This will visually frame the stone fireplace in the finished great room. 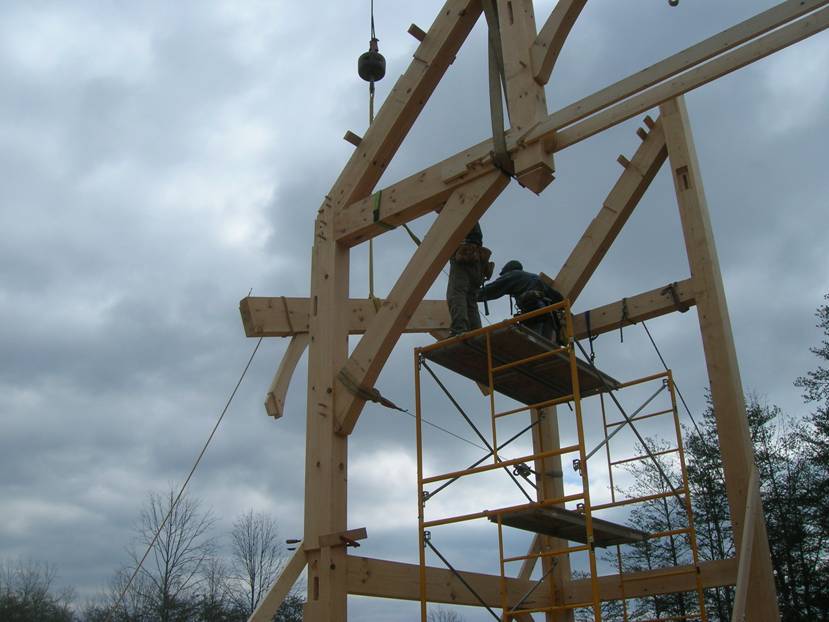 Then the girders inter-connecting the two bents were installed, one at a time, including the knee-braces that add rigidity to the frame. 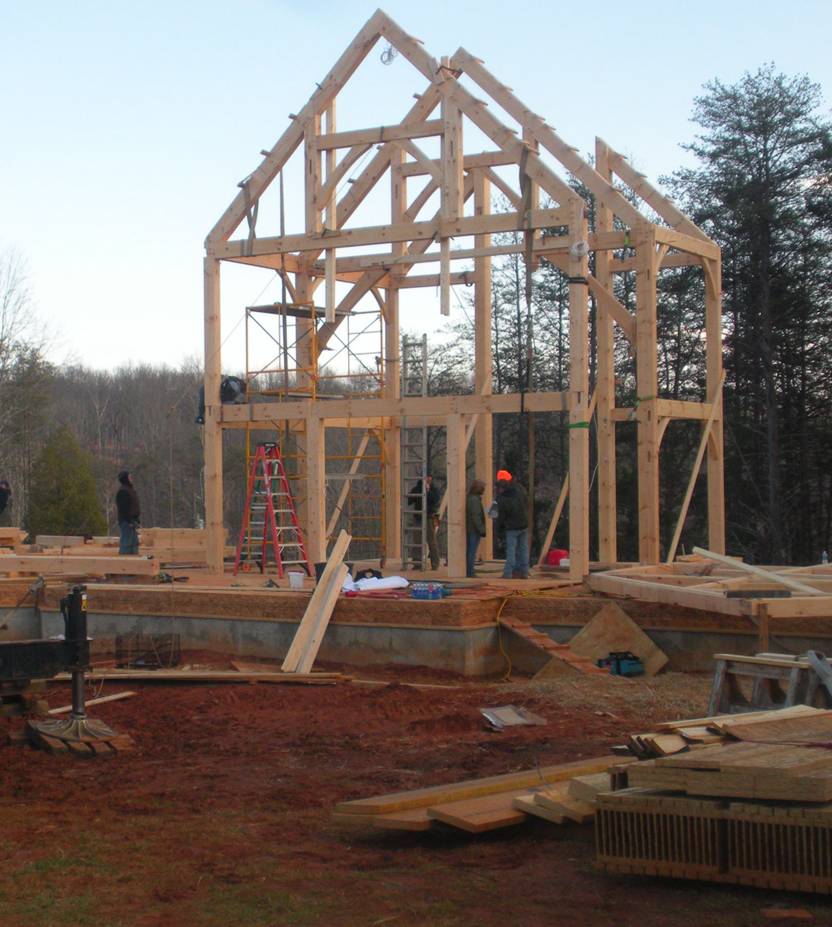 By the end of the day we had 3 of the four bents in place, with enough of the interconnecting girders to assure us that all would still be there in the morning (that’s me in the orange hat, talking with Paula Davis, the Project manager from Blue Ridge Timberwrights).  Tomorrow we’ll install the fourth bent and all the rest of the interconnecting girders and purlins.  Today was Karen’s birthday and tomorrow is mine.  This is the best birthday present either of us has ever had!  We are so thankful to see the house that we have dreamed of for over 6 years finally coming together.

TodayWSLS-TV, Channel 10 in Roanoke is coming out to do a story on us, our timberframe house and our B&B.

Looking good Jack!! I can't wait to come stay there for a long weekend or maybe longer!