Posted on February 24, 2016 by Bedfordlandings

Many guests who have stayed at Bedford Landings remember Kramer, our little black dog, who cheerfully greeted them at the door. One month ago, our beloved peke-poo, Kramer developed dizzy eyes, was stumbling, and walking in circles. He was diagnosed with a neurological issue (perhaps a brain tumor). There was no way to know for sure without a $2500 MRI. On a nearly 19-year old dog, we opted to just care for him and make him comfy. The vet hydrated him and I spoon fed him. His appetite came back some as I had held him and used a baby spoon to feed him baby food and gravy. He gulped down brown rice on his own after about 2 weeks and I felt hopeful that he was rallying. Then last week, his breathing became labored and he was coughing more like he could not catch his breath.   The vet said he was in congestive heart failure and his lungs were filling with fluid. I guess that his body was simply shutting down. The vet put him in an oxygen tent and now a decision had to be made. My daughter who has a degree in veterinary technology explained that essentially he was suffocating. So whether to administer the humane injection was the decision that had to be made. My sister Sherry joined me at the clinic since Jack was out of town. Snapping this final photo, she mourned with me as Kramer relaxed and crossed the Rainbow bridge. 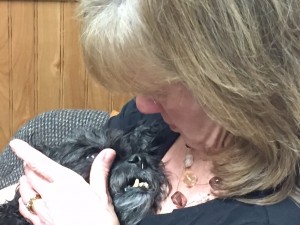 As I sit in my office writing this, I keep thinking I can hear his little feet or him breathing. Guess I will have to get used to the silence!

And why is it soooo silent? Jack is not here.   After Kramer died, we left the house and flew to Florida to visit friends. It was actually perfect timing to remain in denial of losing our sweet dog and it served as an escape for us! We had a delightful time visiting my stepmother in Lakeland, having lunch with my uncle and cousin from Orlando and then flying to Naples to visit friends. In Naples, we could not believe the huge, huge homes that just housed one family! Millions of dollars in gulf property with gates, landscaping, unique designs…just amazing! But more than that was the hospitality of our friends. We sure enjoyed them as we ate, danced, shopped, ate, boated, danced, sipped, walked on the beach, watched the beautiful sunset, collected shells, ate, went sightseeing and packed in a great deal in 2 days. 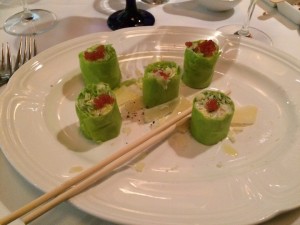 This was my Caesar Salad. Nice presentation! 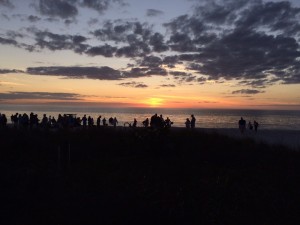 Those are people in the beach waiting and watching the sunset.

After Naples, we flew north to Sebastian, Florida. There, we have several friends who have moved from Smith Mountain Lake who now live there. We also good friends from Raleigh who we had planned to stay overnight with. And it’s a good thing that they are “good” friends and pilots because they understand how weather can complicate travel. Our plans were to depart Sebastian for home Tuesday (2-23). However, the weather was not looking good to fly our little Cessna 170b through the predicted storms. We decided that one of us needed to return home since we have a weekend reservation and miscellaneous other things to attend to — like taxes and an event to launch the 2016 season for the Lakeside Singers . We have accepted a role as conveners for the group and didn’t want to miss the first organizational meeting Tuesday night. It was determined that Karen would return and Jack would stay with the plane until the weather broke. Of course… since Karen is not a pilot!

The weather map looked rather looming and Jack was smart to stay grounded. 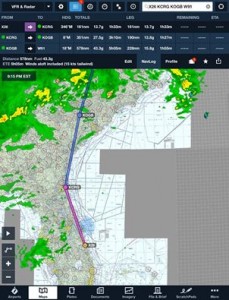 I longed for the warmth of Florida as I set out in sandals, in a sleeveless top, and toting a carry on bag. Jack and our friend John drove me to Orlando to catch a plane at 10:20 to Charlotte then on to Roanoke, VA to land at 2:09. Perfect timing in order to run home and grab the folder I needed for a 5:00 meeting with Lakeside Singers.

I had used my Frequent Flyer miles and the ticketing agent gave me Priority Access and TSA Pre-check status. I don’t know why, except that I paid a $75 fee in addition to my FF miles and maybe that came with it?! At any rate, I enjoyed the shorter lines at the airport. The flight into Charlotte went well. Walking from Concourse B to Concourse E was good exercise needed due to the Naples eating extravaganza. I got to the gate just at boarding time.  Boarding had not started and it appeared as if the flight would be delayed but they were not communicating this.  Since the flight was just 38 minutes and I had asked a friend to pick me up at the Roanoke airport, I didn’t know what to tell her. She was on her way to get me already.

We eventually boarded and I was seated in Exit seat, 2C right in front of the flight attendant’s jump seat.   We were in the soup (that’s “clouds” in pilot speak) so there was no way for me to know our altitude. When Jack and I fly, I can watch the Altimeter so I know more about what is going on.

When it seemed we should be near Roanoke, I pulled out my cell phone and took it off Airplane Mode to see if I could send or receive text messages. I knew from experience flying with Jack that I can generally send or receive messages no higher than 5000 feet. I was able to do so and let Jack and my friend on the ground in Roanoke know we were circling over Roanoke. The messages went through. It was then that I saw the ground and the runway. We were about 300 feet high and ready to land. Messages started coming in with my assigned alert sound and the flight attendant looked at me and did the “shamy shamy” finger rub.

Knowing we were ready to land, I felt we were still going a little fast to be hit the runway. It was then that the plane started adding power and climbing back into the clouds. I also knew that meant a missed approach. We were not landing in Roanoke. Fifteen minutes later, the pilot announced we were returning to Charlotte. It was about 3:15 now, so I started considering how I was getting back to Smith Mountain Lake from Charlotte. I started becoming social on the plane and bonded with two women who had rented a car and were going to drive to Roanoke. We exchanged names and walked together to the terminal. It was 40 degrees in Charlotte and there I was sleeveless and in sandals. I dug out socks and a sweater from my carry on.

Then I heard my name called and an American Airlines agent handed me a ticket for a 5:45 flight back to Roanoke. With the Priority Access, somehow I had gotten preferred treatment. I felt a little like I was betraying my new rental car friends as I wished them luck and set out to see where I was supposed to be next. My phone battery was in the red zone so I pulled out my charger, found an outlet to grab some power. I called Jack who started talking before I could talk. He said the minimums were not acceptable for anyone to land in Roanoke and that I should try to get the new ticket changed to fly to Lynchburg. I found a service counter and they changed the destination without question for a 4:10 flight that was now boarding. No seat was assigned. They just printed the ticket and off I went to the same vicinity where I had just deplaned. I called Jack to tell him that I got the ticket and to arrange for me to borrow my sister’s car. She and her husband keep a car near the airport in Lynchburg for commuting trips from the lake to her present residence in Jacksonville, Florida. I boarded right away and off we flew to Lynchburg. While waiting on the ramp for departure, Jack texted me that all was set with the car. What did we do before cell phones!?!?!

Making a long story shorter, we landed safely in Lynchburg. I drove directly to the Lakeside Singers meeting just 45 minutes late, conducted business then drove home. I haven’t unpacked yet and I am still in my robe. The house is quiet and not even a patter of doggie paws echoes here. But I feel better having shared my story and now will await my own pilot’s safe arrival home (soon I hope!).

While your sister will always be there for you and loves you dearly, yesterday's stress for you was doubled for me. So no more pet or flying emergencies for a while, so we can catch our breath. Doggie hugs and safe landings.

Ceiling at Roanoke was reported to be 500'. Minimum Descent Altitude for the primary approach there is 700'. The ceiling was forecast to go down to 300' overcast and stay that way through noon today, so I don't understand why they thought a later flight would be able to land there. Glad I thought to check the ceiling and minimums in Lynchburg so you could change your flight to go there.

Roanoke needs some of the landing aids common to places like Erie (which I flew in and out of for over 30 years as a passenger) for which a 300' ceiling is considered good weather in the winter. We were happy to see Karen arrive safely at the Lakeside Singers dinner. She gave us a quick summary of her traveling adventures.

Glad you are home safe. Sending hugs on the loss of your dear sweet Kramer.

Karen and Jack, Thoughts and prayers from Kathryn and me on the loss of Kramer. As dog lovers, we know how special he was to you both. They literally become one of the family, and are gifts from God. Both of you will be in our thoughts and prayers.