It was spring for a little while last week.   I managed to put some things in the ground anticipating adding color to the yet landscaped yard.  I used colorful pots and put in sweet potato vine, coleus, and an assortment of colorful potting plants.   Two days later, Jack Frost killed them. I went back to the Moneta Farm store and got more.  So far the temperatures have stayed in the 40’s this week and the (end of) April showers are squeaking in to water our new azaleas, bedding plants, and grass seed.  I hope the grass decides to grow.  One of our guests who is a landscaper, said that the fertilizer that we put down with a pre-emergent killer for crabgrass could have killed the seed.

But I hear Asparagus is good this year!  And my good friend, Rita sent me a cool asparagus tart recipe. We have made it…twice!

Look how lovely it turns out!  We love puff pastry for breakfast and figured we can’t go wrong with butter, puff pastry and cheese with the asparagus.  My sister who hates asparagus even ate it! 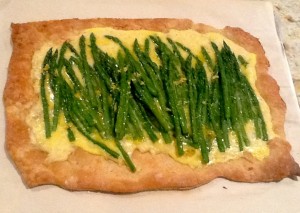 I will share the recipe at the end of the posting but first I gotta tell you that Jack attended advanced biscuit school.  Last night the Bedford Landings test kitchen prepared sweet potato biscuits.  He says he also learned pimento cheese biscuits so we will offer those soon too if they pass the taste test!

Flash of news!! Last weekend, Destiny, our (almost) 9 year old super grand daughter went for her first airplane flight.  Jack let her fly with him to Chapel Hill where the biscuit school was being held at Southern Season.  Her mom picked her up there and she was all smiles!  There may be a budding pilot in the family yet! Yea Des! By the way…we are having a fly-in May 10th!  See: http://www.bedfordlandings.com/index.php/specials.html 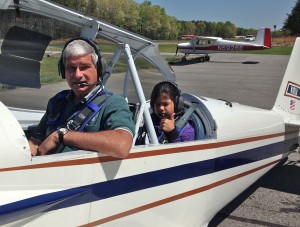 Lastly, we tried to get a good photo of the house with all of the lights on.   Just as it was light enough to see but not totally dark, I took photos from the outside while Jack ran around inside turning on lights. Here is the front.  Look into the top windows to see the upper floor!  Cool! 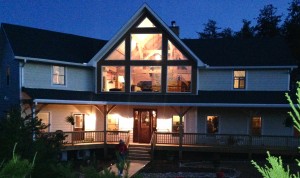 And here is the back showing the hot tub on the lower level, completed deck and screen porch.  Love the glow! 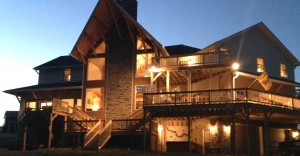 Fill a large bowl with ice water. Bring about 1 inch of water to a boil in a large skillet. Add the asparagus; cook until bright green and crisp-tender, 2 to 5 minutes, depending on the thickness of the asparagus. Drain and transfer to the ice water to stop the cooking; drain and pat dry. Preheat the oven to 400 degrees F.

Roll out the puff pastry into a 10-by-16-inch rectangle on a floured surface. Transfer to a parchment-lined baking sheet and prick all over with a fork. Bake until light golden brown, about 12 minutes. Let cool slightly on the baking sheet.

Meanwhile, mix the fontina, comte, shallot, egg yolks, milk, nutmeg and a pinch each of salt and pepper in a bowl until combined. Spread the cheese mixture evenly over the puff pastry, leaving a 1-inch border on all sides. Toss the asparagus with the olive oil, 1/4 teaspoon salt, and pepper to taste. Arrange the asparagus on the tart and bake until the cheese mixture is slightly puffy, 15 to 20 minutes. Sprinkle with the lemon zest. Serve warm or at room temperature.

I am the sister who ate the asparagus. I'm a pushover for anything hidden inside a pastry...loved it and my body was happy to have a veggie in it :-) It is hard visiting two industry experts in the service and kitchen department though since everything they do is served with flair and panache..having hotdogs when they visit can NEVER happen!