Posted on February 9, 2015 by Bedfordlandings

It couldn’t have been a more delightful day at Bedford Landings than February 8, 2015! The temperatures rose to 66 degrees, we opened the windows and welcomed six wonderful biscuit makers who were enrolled in Biscuit School 101. Now that was something beautiful in and of itself! They donned their aprons and gathered around the island. These photos don’t even begin to show the fun these women had making biscuits! 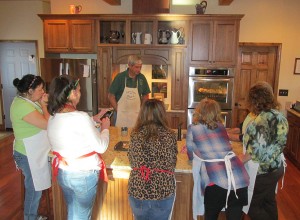 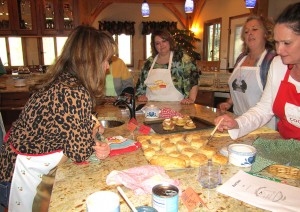 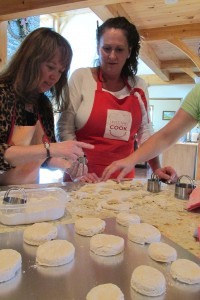 Jack instructed them on basic biscuits and all the associated secrets then demonstrated making sausage gravy and a biscuit dessert that includes honey and cream cheese! 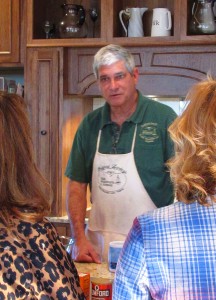 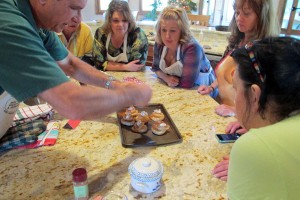 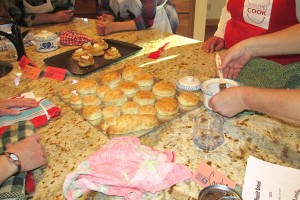 After biscuit school, Jack and I decided it was nice enough to take a plane ride over the lake. If you have never seen the lake by air, then you are missing something beautiful! On a clear day, you can see for miles and miles, can identify people’s houses, and I love it when I can take my camera along. I took 86 photos in about 30 minutes while were in the air. I am sharing only a few. Mainly I am trying to get a good aerial of the house but it may be summer before I get the perfect one! Everything will be green then! 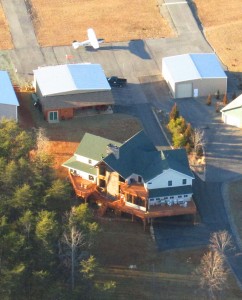 Jack’s Cessna in front of our hangar

And that is Smith Mountain! 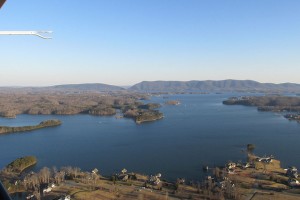 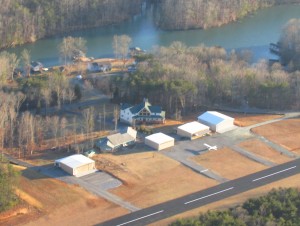 Overlooking the runway. Our hangar is the one with the little airplane on the ramp

We ended the day sitting on the deck watching the sun set. Now that’s something beautiful!

wow...we need to visit! when did that new hanger go up next door and the lot cleared??

Biscuits with Jack was great. I didn't know biscuits making could be so much fun. Jack has the cutting edge on the biscuit making down pat. His only trouble is to keep Karen from snatching and washing his utensils before he is done with them. I loved it...hope he wants to bake something else soon. Delicious job Chef Jack.

Hello Friends!!!!! So nice to see new postings on your blog! Always love reading them! I wanted to just reach out and take one of the biscuits, Jack!!!! Miss you!xoxo

a harem of biscuit bakers. What fun classes you offer. When is towel folding into cute little animals?

Great views! Almost as good as being in the airplane with you. And all those biscuit bakers really were paying attention to Jack. Quite a harem!

Awesome pics, Karen! I just might have to drive up JUST for a biscuit or two with (real) butter and some of your honey!!

Thank you so much for the Biscuit School 101 class. I was so proud of the biscuits we made. I am planning to go solo this weekend. We had lots of laughs and left with biscuits and full stomach. Thank you Jack and Karen you have a beautiful home! I highly recommend the biscuit class and a weekend stay at Bedford Landings. You won't be sorry!