One for Tequila Whiskey

Posted on September 26, 2019 by Bedfordlandings

When Jack and I met in 2003, he was more than 75% finished with the Pietenpol Air Camper that he was building. This unique 1929 design open cockpit airplane was sitting in his basement and he was working on the fabric covering.

Structure of the Pietenpol before the fabric covering

I learned that building things was Jack’s hobby and that aviation was his passion.  Every day after work and dinner, he would go to the basement to work a few hours on his airplane.  It was at that time that I started writing my first book, a poetry book entitled Love to Share .
I compiled all of the poems I had written over time for people and about events. This project was more in keeping with my hobbies and helped me pass the time while he was in the basement completing this airplane.

It was a fun day when he first took the first flight in the Pietenpol (2004). In June 2006, we got married. And of course he was already flying the Piet around the Raleigh area where we lived. The cute plane was getting a lot of acclaim and people thought it was a great piece of work. I agreed. He even won an an Outstanding Workmanship Award at Oshkosh for his masterpiece.

That summer (just a month after we were married), we went to Air Venture in Oshkosh, WI  where the biggest international fly-in event is held each year. He wanted to know if I wanted to look at the RV-10s. It was during that fly-in that he decided this would be his next airplane project. This man always has to have an aviation related project going on, it would seem.

The RV-10 came in a series of kits to be purchased. Whereas Jack built every last wooden piece of the Pietenpol according to the Pietenpol family blueprints, the first RV-10 kit arrived looking like an erector set.

Empennage kit, the first of many.

It was a project that I would never have tackled. But Engineer Jack thrives on this sort of intricate mechanical puzzle.

The instruction notebook alone was massive. He highlighted each completed section. 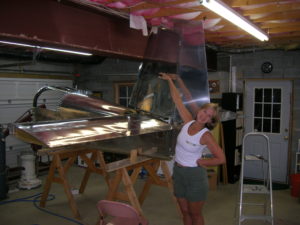 Of course I wanted to be involved with what he was working on so here’s a picture of me holding some of the initial structure of what was to later become a completed airplane. There were sooo many rivets to hold the plane together and I “bucked” my share of rivets.

The tail kit was the first to complete.  Apparently a lot of RV builders never get beyond this point.  It lets you try your hand without a great deal of investment. We started work on it in our basement in Raleigh, North Carolina.

One of the most astonishing steps, I felt was when Jack announced that he had bid on a refurbished airplane engine on E-bay!  I could hardly believe that this was something he could count on. He claimed that because the logbooks were included and the engine had just been overhauled, according to the seller, that the engine would work just fine. Ho boy! That engine sat in the crate about 11 years.

After a few years working on the wings and tail, we made a big decision to take a  bit of an early retirement and move to an airport community at Smith Mountain Lake. We closed on the land actually a month before we were married.

Once our house went on the market in Raleigh we knew we had to put the RV-10 pieces that had been completed in the crate to store them safely in order for our house to show and for us to move and eventually build our dream home, which became Bedford Landings Bed and Breakfast. This photo shows the trailer loaded down with the crates of pieces and parts that had been completed that were to go into storage. 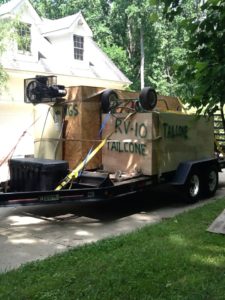 Trailer with coats with RV-10 parts to be stored.

It was during the housing crisis (about 2012)that  we decided to sell our home in North Carolina. Taking over 3 years to sell the house and another 18 months to build Bedford Landings, the tail and both wings remained in storage for over four years. During that time, of course, he could not make any progress on the plane but we built a house! Once we had our business up and running, we were able to uncrate the parts of the airplane that were completed and he spent a good deal of his 401(k) on purchasing the next kits. 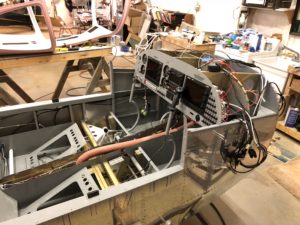 One of the largest (and most expensive) purchases was the instrument panel.  He traveled to Oshkosh in 2017 to get the show deal (and of course gawk at the 100’s of thousands of airplanes at the fly-in. The installation of the “built to specifications” panel required exact wiring to be sure each control was properly wired.

Every  phase of this project has brought new shape to the airplane; adding the landing gear, mounting the very heavy engine on the fuselage, eventually disassembling the entire project and taking it on a trailer to the paint shop located in Salem Virginia, and then finally taking it part by part to the Martinsville airport to reassemble it where Jack would do his first flight. 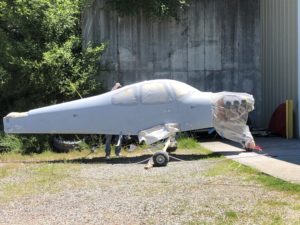 Primer on the fuselage.

This total project has taken him 12 1/2 years to complete and I must say I’m very proud of the tenacity in sticking with such a long term and involved project. I’m not sure I’ve ever worked on anything for such a long period of time to see it through until completion except of course raising my children.

And what did I do while he was in the hangar building an airplane?  So far, I have 5 books.  Three are children’s books written with my grand children as key characters. Each book also features airplanes.  One is about my mom’s journey with Alzheimer’s Disease and then there is my first poetry book

Jack is half way through his (FAA) assigned 40 hours of flying the plane solo.  This time flying the plane helps him trouble shoot and learn all the workings on the electronic systems. Once the 40 hours have been logged, he can take a passenger.  Who wants to go first?  Wait, I think I will!

Lastly, some have asked what the significance of the call numbers are on the plane. There is a pilot’s alphabet so that making calls over the radio are clear.  A= Alpha, B= Bravo, C=Charlie and so forth. Generally the numbers and letters that come after the “n”  are used as the call letters of the plane. All American airplanes start with “N.”  N= November but in the case of the new RV-10, we would just call out 142KW.

Say his call numbers fast (reference the title of this blog) and see what you have! 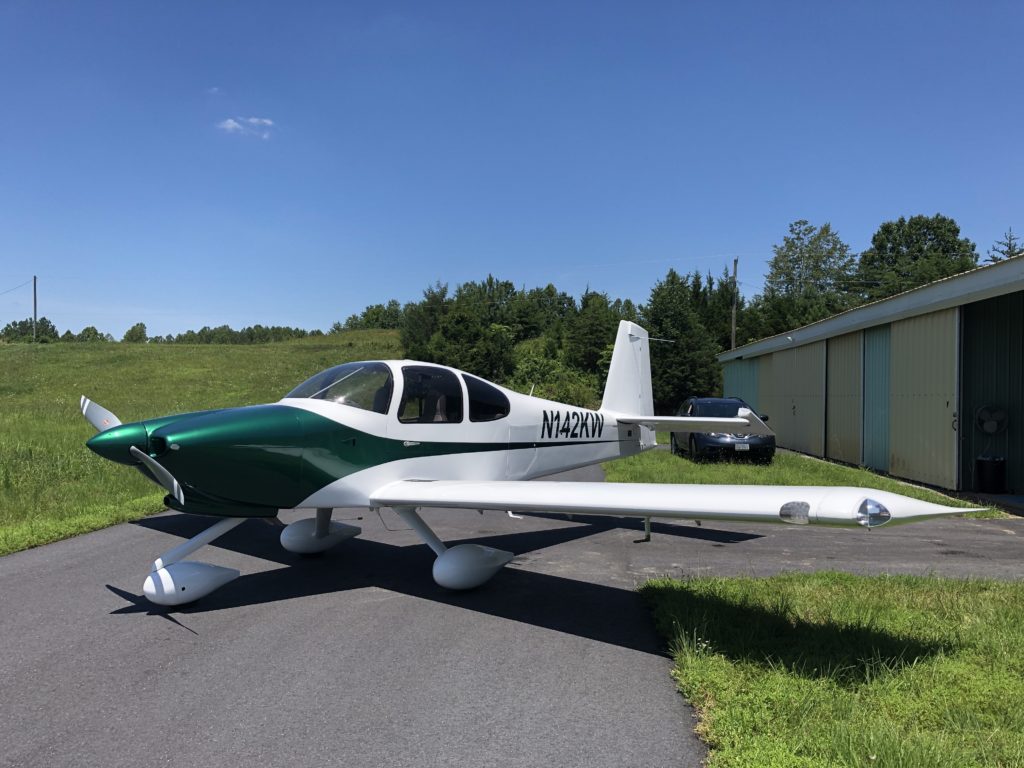 One for tequila whiskey!