Posted on September 25, 2017 by Bedfordlandings

It’s been a tough week. Last Sunday, Jack was deployed to Puerto Rico with the Virginia Urban Search and Rescue Task Force 2 team. They are based in Virginia Beach with trainer rescuers, fire fighters, dog handlers, and engineers making up the team. Jack is one of two structural engineers on this team. Of course he was a career mechanical engineer (designing things like cell phone and medical devices) But about 6 years ago, he trained to be part of FEMA. The training was no cakewalk including scenarios in rubble piles, confined space drills and more.

One of the many team meetings to plan during Hurricane Maria.

My brother made a career of firefighting and First Response work including FEMA and IST command work. He was been a part of disasters and rescues, but generally was the Captain in charge including disasters such as the Oklahoma City bombing, 9-11 Twin Towers, Hurricane Floyd and Katrina, Haiti and even when the space shuttle Columbia crashed over Texas killing seven astronauts. He was the first to approach Jack about this work. This was Jack’s first deployment so we both had some things to learn—including acronyms! 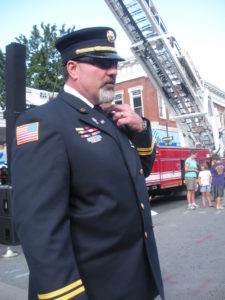 Usually the first responders are not deployed to the disaster area prior to the event but this team was able to deploy pretty fast since their cache (trucks, pallets of gear, etc.) were already in PR because they had been delivered as part of Hurricane Irma the week prior. They hunkered down with many residents who fled their homes in the Hotel Intercontinental. Keeping the team in the stairwells for hours during the worst of the storm and continually checking the roof and basement flooding was part of the day’s work while Hurricane Maria pounded this already vulnerable island.

So its been a week of me explaining to guests why Jack is not here at Bedford Landings and me twice miscounting how many bacon pieces to put in to the pan to feed the guests. Jack usually does the bacon and coffee in addition to waffles, Eggs Benedict, biscuits, and a few others dishes. While he was gone, I mowed, pruned, mulched, went to the dump, hosted the B & B association here, volunteered for the wine festival, took his truck for inspection, and the dog to the vet. I experienced lower back pain totally due from stress (I didn’t think I was stressed!!) and contracted poison ivy on my FACE! After a shot of cortisone and a round of prednisone, however, I am feeling fine now and FULL OF ENERGY! We both thank all of you from the bottoms of our hearts for your support and prayers during this time!! 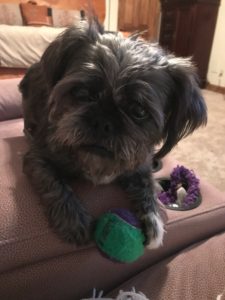 That Bella!! Addicted to her ball!

After Hurricane Irma, my sister, who was visiting her soon-to be-retirement home at SML, left a week early from the lake to return to her one-bedroom apartment in Jacksonville, FL. It had been flooded causing trauma for the 16-year-old cat that was homebound atop the refrigerator and with 4 feet of water, her Prius was totaled; mold already growing on the upholstery. We have had guests who came to stay with us instead of their (cancelled) cruises and reports from guests who have experienced damage to their Florida homes. So much devastation. So much speculation about what it means! We can’t know. We can’t predict. We all just help each other out and keep putting one foot in front of the other.  Keep your hearts light! 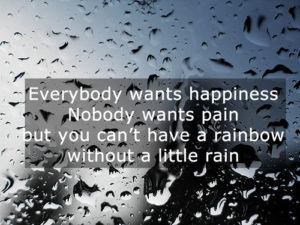 I just got word that the team is heading home tonight!  Awaiting transport from Puerto Rico.  Welcome home, Jack!

So proud of Jack's service, Karen's ability to overcast me it all and the love of family.

Karen and Jack, So proud of you both. You are inspiring to all of us. Thanks for your service. We're praying for you. Hope to see you sometime. Know your place is awesome. Take care of yourselves. Mcp and Dennis