It was a Bonding Experience

Some of you recall reading on this blog one year ago about our move to Smith Mountain Lake. Our movers weighed our stuff (that now we fondly refer to as JUNK!). It weighed 8 tons. Stashed away in three storage units, there has been little chance to retrieve the file cabinet and several other items that were supposed to have been delivered to the hangar instead. Storage Unit A is our largest and is 30 feet deep. 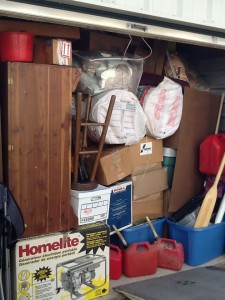 This week, Jack decided he needs that mantle after all that I blogged about a few weeks ago. He needs to frame in for it and the propane folks need to install the gas logs. So in 90 degree weather, we went to the storage units last evening. First we checked Unit “C” since it is climate controlled and a cool place to be on a hot day. In Unit C is the piano, Jack’s RV10 engine (for the next plane project), art, mirrors, and mattresses. No mantle. Next stop Unit “B” the overflow unit where we can see all the way to the back. No mantle. So we had to tackle the Unit “A” in the photo above. We had visited good old Unit “A” in search of Jack’s kilt a few weeks ago and found it in a wardrobe box only 10 feet in. We took out that same 10 feet of boxes and JUNK and could not see the mantle.
As a kid, I loved to climb trees and as a teen, I loved gymnastics. Well, I was able to revisit these two skills. I used that barstool (in the photo) to climb on top of the entertainment center then went overhead from desk to sturdy workbench on top in a space of about 18 inches. The sweat started dripping them streaming off my entire body. Unit “A”was a hot box; but with flashlight in hand, I was determined to at least locate that mantle. It was against the back wall (yes, 30 feet deep) and nested in it’s legs was a bookshelf. In the bookshelf were nested boxes. But I found it.

Now it was Jack’s turn to help me move off boxes and bring up the bookshelf so we could get to the mantle. We found a roll of paper towels and mopped sweat! I pulled and he pushed that bookshelf over the total 30 feet of stuff in the unit. He stayed back to strategize about retrieving the mantle. I was glad to be the first out to the fresh air and grabbed a gatorade, regrouped, breathed, then went back in. I passed him the gatorade and together we rescued the mantle! We loaded it in the truck and brought it back. I never saw the file cabinet. Hmmm!

Later that evening we were patting each other on the back for being determined and not giving up on that task! It was a marital bonding experience (as much of this project)!

Today is the day we leave the old blog site and re-enroll to receive notices of blog activity.  There is a link on the left that says Entries RSS.  Click this and then SUBSCRIBE.  I hope that works for you!  Thanks for caring enough about us to watch our dream unfold!

Tomorrow you get to hear all about our new steps to the second floor!