Is a Bed & Breakfast a Money Maker or a Money Pit?

Posted on August 19, 2019 by Bedfordlandings

When we decided that our retirement home would become a Bed & Breakfast, we knew it would not really be a money making venture.  Instead, we looked at this endeavor as a way to have a retirement project that was a new life and a totally different one than our corporate or academic worlds.  We have found that it is a life change.  But, we are thriving while being involved in a vibrant community and enjoying this interesting vehicle to meet fascinating people, to build a business together as a couple, and to experiment in the kitchen. 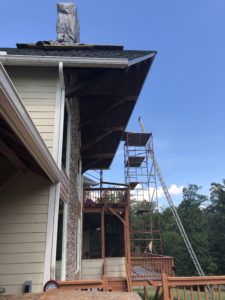 Scaffolding to get to the roof and chimney.

Having built our home/Bedford Landings six years ago, we are now starting to experience some of what every homeowner dislikes…repairs.  During construction, when the stone mason and the roofer had a disagreement on the roof, the chimney was not properly flashed.  Neither of these subcontractors would take responsibility for fixing it over the past 6 years.  Instead, we have had a parade of subs to estimate; then never show up for the work. Two of them applied some sort of tar substance hoping for the best. Others were simply not interested in climbing on the roof 50 feet off the ground.

Every time we experienced a torrential rain, there was a drip that ran down one of the timbers and dripped on the window seat below.  We put down towels and buckets but were fearful that we would have mold growing underneath.  I am deathly allergic to mold and mildew.  Using word of mouth (through the Residents of SML Facebook page) there were an overwhelming number of recommendations to call on Bob Riddick Home Services. 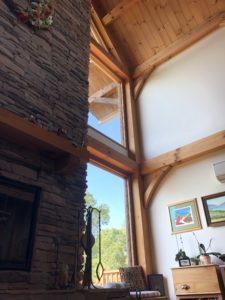 A long way to drip!

They gave me an initial estimate of $3000 to make the repair but once they removed the first layer of stone, they found bigger issues.  To make a long story short, our investment in this repair ended up being about $9000 instead. However, we feel confident that the problem has been resolved.  During this two-week period, they were a great crew, cleaning up as they went and were cordial with our guests.  Since then we have had several torrential rains and no leaks.

That brings me back to money making.  We had a good July with only one day off the whole month and earned enough to pay for this roof repair.  All months are not like that.  That was one of our best.

Next we go to the screened porch.  Jack was DONE with building the house when it came time to screen the porch.  Neither of us has ever been happy with the resulting screened porch.  When the screen pulled away (in yet another wind and rain storm) and started flapping in the wind, our staple job just would not hold.  We enlisted a screening company. Jason Nuckols at Vinyl Porch Railing, who agreed to re-screen the porch.  In June, he promised it would be scheduled in about two weeks. However they were unable to work us in until mid August. This wasn’t a huge concern since we were still working with the roofers and welcoming guests to enable us to pay for the repair. 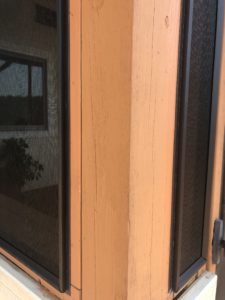 The screen replacement totaled $1650 but they did a really neat job and we can check that off the list.  Next, who do you know that can repair (and waterproof) the ceiling of the screened porch? Maybe next summer’s project!

During the end of July and midway into August, we have been without our primary washing machine. After diagnosis, a gearbox  (third one for this Maytag in 6 years) was ordered and needed to be installed.  Sears Home Warranty gives consumers a designated window of time in which the repairperson will arrive. My window was a large one…8-5. The repair guy arrived at 4:40 and we had dinner plans with friends for 5:15.  He fixed it and we headed out the door a little late for dinner. In the interim, we used the washer in the hangar.  Recall we had lived in the hangar and never have gotten rid of the washing machine that is there.  We use it when we have to flip all four rooms in one day. That little craigslist washer was a lifesaver with our busy July.  Housekeeper Patty got in plenty of extra steps those 3 weeks.  I had purchased a home warranty on all of our appliances and am glad I did but am totally considering purchasing a Speed queen washer when our coffers build back.

We’ll Sing in the Sunshine!

To power a 5700 sq. ft home we range from $400-600 per month in electric bills depending on the weather.  We have considered Solar power for some time and we finally bit the bullet and had Main Street Solar install panels.  This expense required a line of credit, which needs to be paid off in a year.  We are hopeful that with the $10,000 tax credit and continuing to market the B & B through the fall and winter we can pay for this investment. 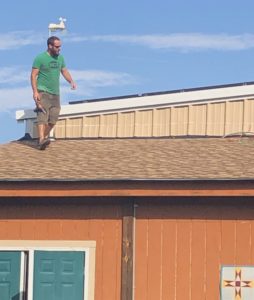 See black edges of panels on top of hangar.

It is estimated to show a pay off in about 7 years. 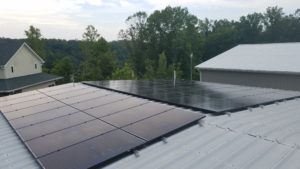 48 solar panels atop of the hangar.

We had the panels installed on the hangar.  There is no shade and it’s a nice flat surface.  Andrew from Main Street Solar took a photo of the 48 panels. They are yet to be inspected but we are really excited to watch this investment pay off!

Referring to last month’s blog, recall we are trying to minimize our impact on the environment and the installation of the solar panels is yet another way we are attempting to reduce our “footprint!”

So the original question—is this B & B a moneymaker or a money pit?  Referencing a book we read when we were deciding if we should or could run a B & B, “…it affords you to live where you want to live.”  And for us, we have been able to realize an allowance to re-invest into the business. Of course greater than that, Bedford Landings provides a home to share with new and old friends and family as well!  We still like it!

Because you are both vivacious and creative people, you continue to offer innovative improvements to your business and home! Cheers to you both!!!

You guys are very patient, I do not have the patience or even the expertise to even attempt such a monumental task. Through all of this I've heard Jack has even built his own airplane, and is a member of a search and rescue team! Keep up the patience even during the worst of times, continue to set the example. Good luck.