It’s been 25 years since Dad died. Recently I asked my brother and sister what they remember about Dad. Of course, we all remember him fondly, and want to attribute the best parts of our accomplishments and ourselves to our parental upbringing. But, I wondered if I was the only one of us who had little recollection of specific lessons he taught or traits that we may attribute to him. 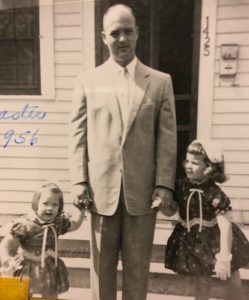 We are all three years apart. I am the middle child. Sherry, my older sister had the most glowing memories. Of course she was the only child for three years until I came along and rocked her world!

Sherry remembered that he had big hugs, he taught us to dance in the living room and had a sign by his desk that said “ WHEN THE GOING GETS TOUGH, THE TOUGH GET GOING.” He believed in setting an example and expected people to live up to their potential. He liked chocolate cake, clean plates at the dinner table, singing CAMELOT, football, Ed Sullivan, woodworking, and he wanted to be liked and admired.

I remember that at the end of the work day Dad would arrive home in our (one) family car.  In the traditional 1960’s household, Mom had dinner ready, we all ate, and then we played outside (generally kick-the-can) while Dad watched the news on TV. I don’t recall him playing with us or tucking us in at bedtime. 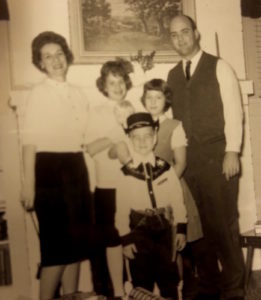 I believe he did like to create traditions and memories. On Christmas morning, Dad said the same thing every year, “Let’s see if Santa has come” while he went into the the living room to turn on the tree and exclaim, “Oh my would you look at what he left!” 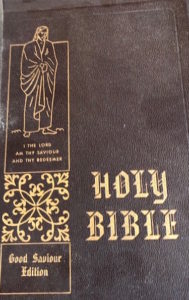 And he read the Christmas story from our large family Bible before we went to church on Christmas eve. At the end of  the candlelight service, I recall his big booming voice singing “Silent Night.”

When I was a kid, Dad told me that I was very “average.” Jack thinks that is a horrible thing for a parent to tell a child. I feel that I may have caused me to work even harder for him to be proud of me (eventually earning a doctorate). Mike indicated that Dad never got over his dropping out of Va Tech in favor of fire training!  Reflecting on it,  “I still feel it was my best decision because I was too immature for college at the time.  However, becoming valedictorian after 6 months of rookie school in the Fire Department got me a pair of running shoes that I appreciated.  And that career served me well.”

Sherry and I have often compared notes about feeling that his love was conditional based on grades or performances. Sherry says that Dad seemed hard to get close to, perhaps because he was the “designated spanker at the end of the day after we had been fly swatted by mom. When he got home we got his belt whipping for the same offense we had been fly swatted. “ 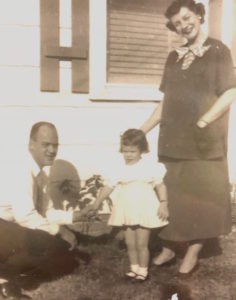 Mike, three years younger than me, and the only boy, says that he thought that the negative things (belt, frowns, yelling, never-could do-enough) only happened to him.  Mike, now a retired Fire Chief, says that as a child,

“I worked my ass off, almost brutally; I used to sit and cry sometimes while on my paper route or my endless grass mowing. In my career, I have been accused of being stern in my teaching. I guess that all evolved from the example that Dad set. “

I don’t think I ever really knew Dad as a person. He and Mom eventually divorced and I came to know him a little better as we spent some one on one time together, but by then I was in my mid 20’s.  Dad served in many university administration positions before finally taking an early retirement as a university administrator. I was glad he retired at age 60. He seemed happy and more open.  Hmmm.   He remarried and excitedly moved to Florida, living 10 happy years with our stepmother before succumbing to cancer at the age of 65. Sherry said, “I hated watching the chemo treatment rob him of his being the virile, proud man. I couldn’t accept nor believe that was the way he would die.”

Twenty-five years ago, Dad and I watched the movie Camelot at his home in Florida. I sat next to him and held his hand. We knew he would die. He asked me if there was anything I wanted to ask him and I truly could not think of anything. I can think of lots of things now.

Nobody ever said parenting is an easy job. And our memories of our fathers may not even be on target.  But happy Fathers Day to all of the fathers who are doing their level best to pass along positive traits to their children.

Who knows what my children will remember about me when I am long gone! I thank both of my parents for somehow teaching me to be organized, not to procrastinate, to prioritize, to care about others, to work hard, pull my own weight, and to continue to learn and grow throughout life. I hope I have passed some of that on to my children. And guess what? I am still here if you have any questions!

Daddy was a powerhouse in all lives he touched. I wish he were here today go hug and love more.thanks for remembering for us Sis!

Amen and amen . I remember many of those same things he told me of his life before I knew him. He was so proud of all 3 of you. Each of you being unique. He also taught me many things. One was patience. And also to be tough when the going gets tough. I feel so lucky to have an extended family. God bless all of you.