Can you hear them?

I often hear music in my head.  Tunes stick with me.  Jack and I are singing with the Lakeside Singers (concert is June 7 & 8 if you want tickets!) and we rehearse on Tuesdays.  This year we are singing a great variety of  music including show tunes, Beach Boys, Abba, patriotic and more.  After rehearsal, I may have West Side Story (“I want to live in America”) or Wizard of Oz (“Ding Dong the Witch is Dead”) in my head.  On Sundays after church, I get the anthems that the choir has sung stuck in my head.  Bill Weisser calls these “ear wigs.”  Well as we have been working on the house, I have movie “ear wigs” too.  OK, so I am a bit (well maybe more than a bit) OCD, but now that the chorus of the 17 year cicadas is growing louder, I hear myself saying a line from “Silence of the Lambs” Remember that scene? In this clip, Lectern touchs on an unpleasant memory for Clarice, then later haunts her with the phrase “Can you hear them Clarice?”

Anyway, The singing cicadas make me think, “Can you hear them?” We are finding their little bodies laying around.  I haven’t tried to fry them yet but I understand they are a delicacy in some countries. 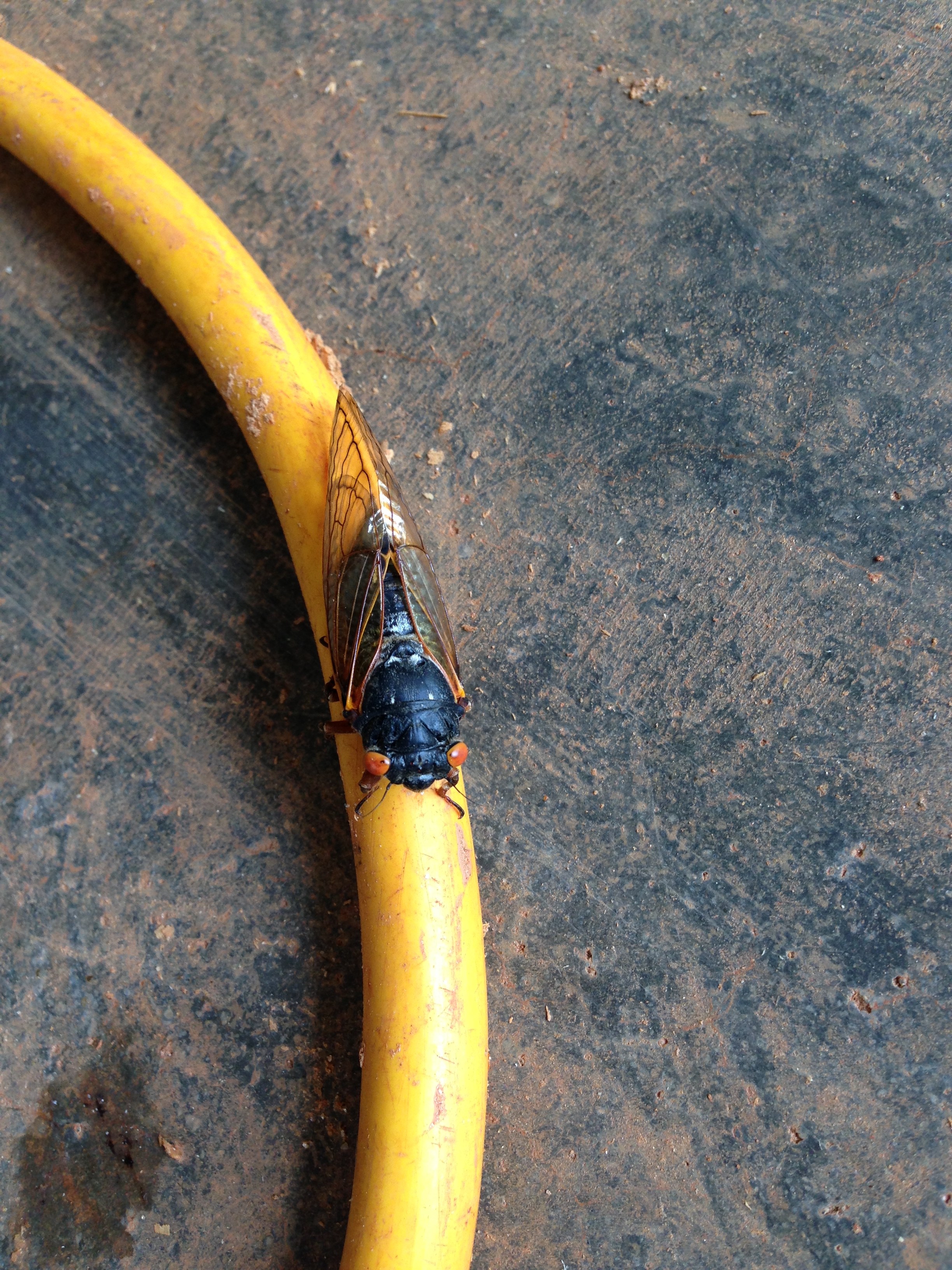 17 year cicadas have been underground for 17 years until now!

It was so wet this week and still raining today.  Muck boots are all that will do when it’s like that.  The mud is like quick sand! 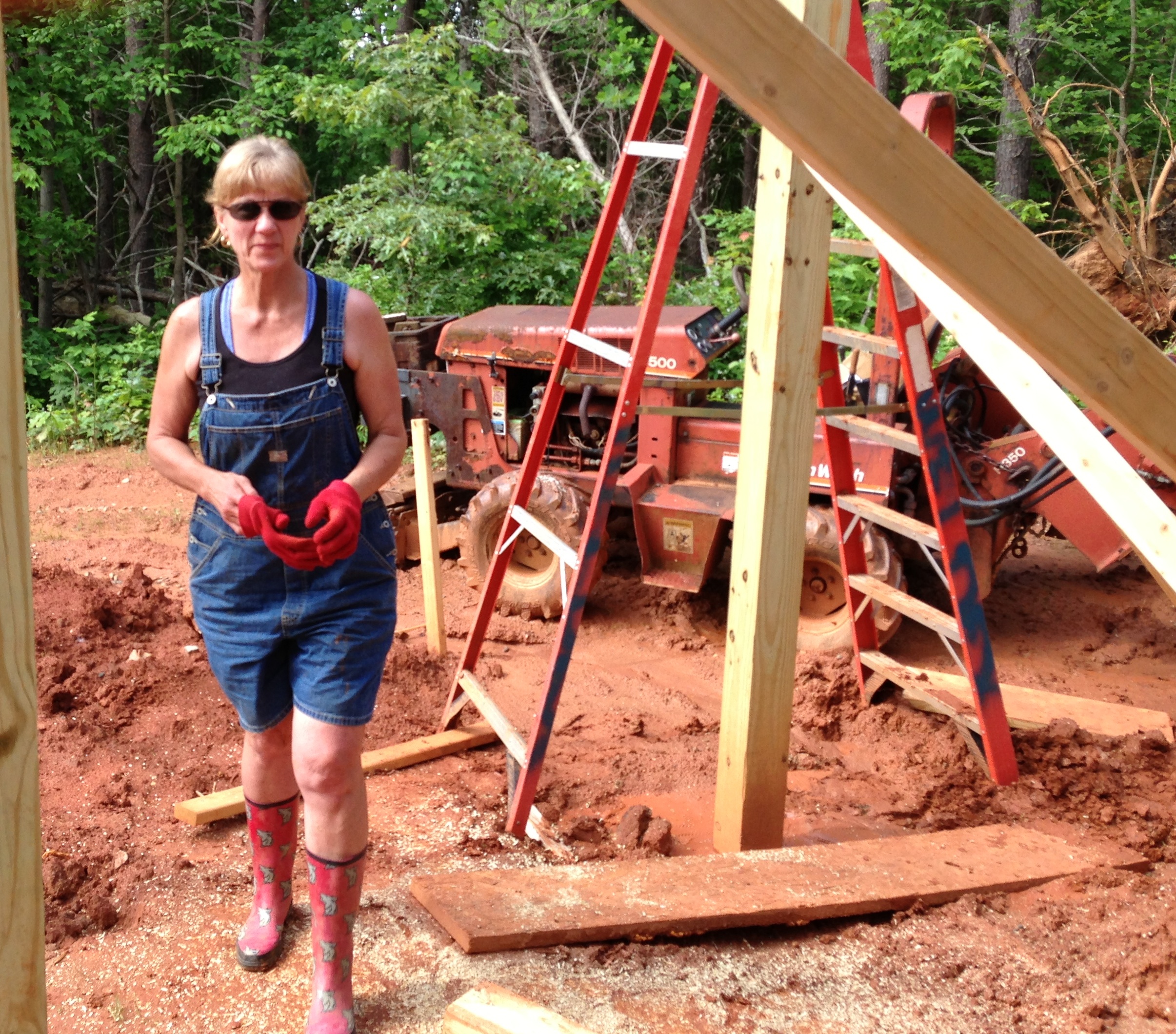 And we have to stabilize the ladder with contraptions like this. Don’t try this at home! 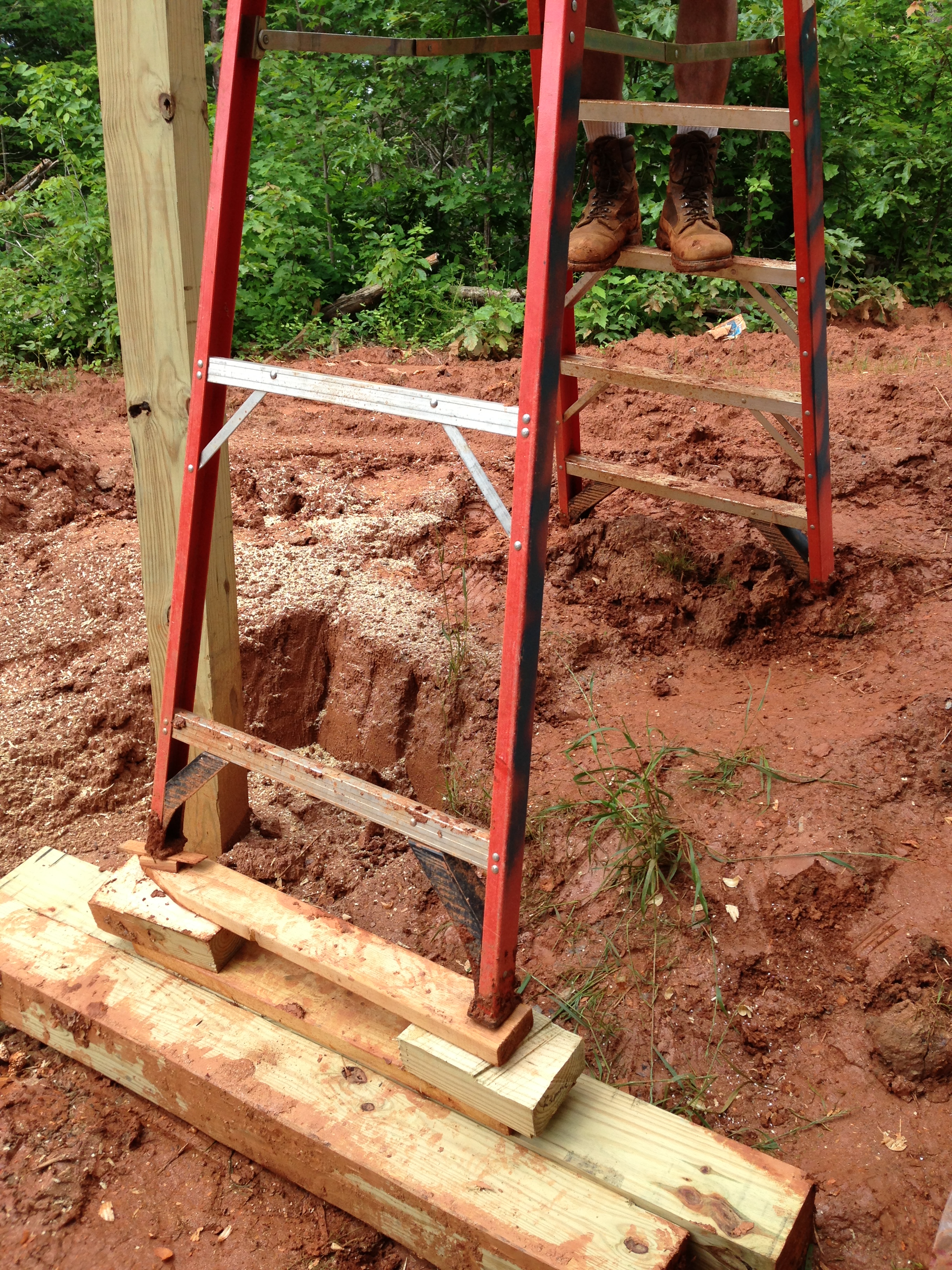 Despite the mud, yesterday and the day before, I was on ambulance duty in case Jack had a chain saw accident as he reduced the height of the desk posts to accommodate the deck joists.  But it reminded me of the scene in Christmas Vacation where Clark Griswald saws off the newel post.  As each post top falls, I hear in my head, “fixed the newel post!”

Each time Jack dons his protective gear and takes the chain saw up the ladder, the portion that is sawed off, spins and falls just like in the movie!  Sorta funny but highly dangerous!  Again, don’t try this at home!  We were lucky. No injuries and all the posts are cut! 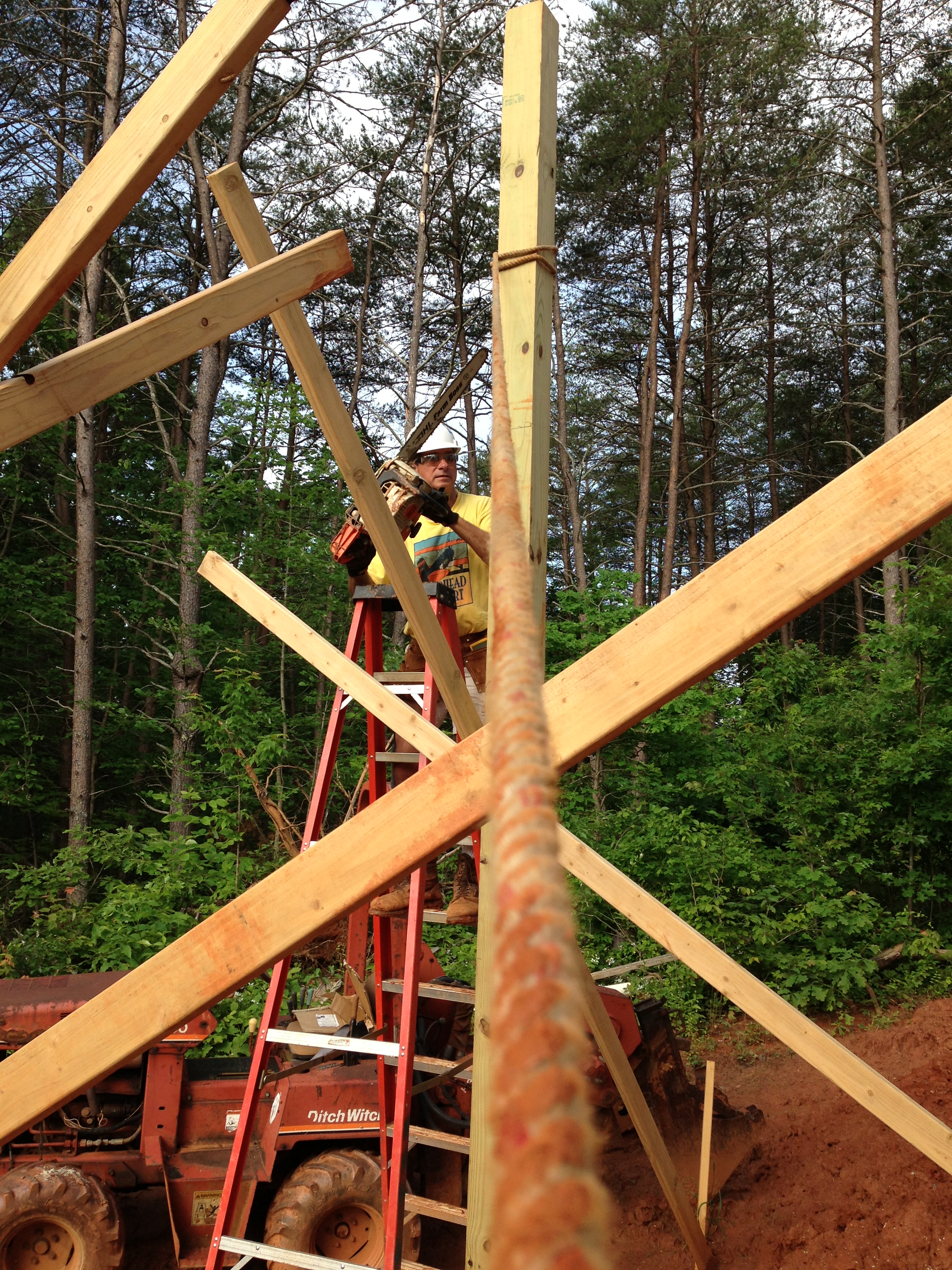 Note the rope tied to this post going up the center of the picture. A skilled photographer with a rope in one hand and a camera in the other took this!

ok- so I have a perverted sense of mindfulness and entertain myself in my head.  Don’t you?

As well, this week, we are signing contracts on all of those estimates I have been getting.  We contracted with New Design Stone (Sandy Shelton) for the chimney and enlisted Elegant Designs by Sheryl for the kitchen.  Tomorrow I am visiting Prosource in Roanoke to relook at the flooring I thought I wanted 8 months ago and today I am hoping to visit with the propane people and sign a contact with them for running gas for fireplaces in the rooms.  I had to look high and low through my old photo albums to find a picture of the mantle I had refinished several years ago.  It is in storage and now Jack needs a measurement to frame the wall for it.  I finally found its before and after on Facebook! 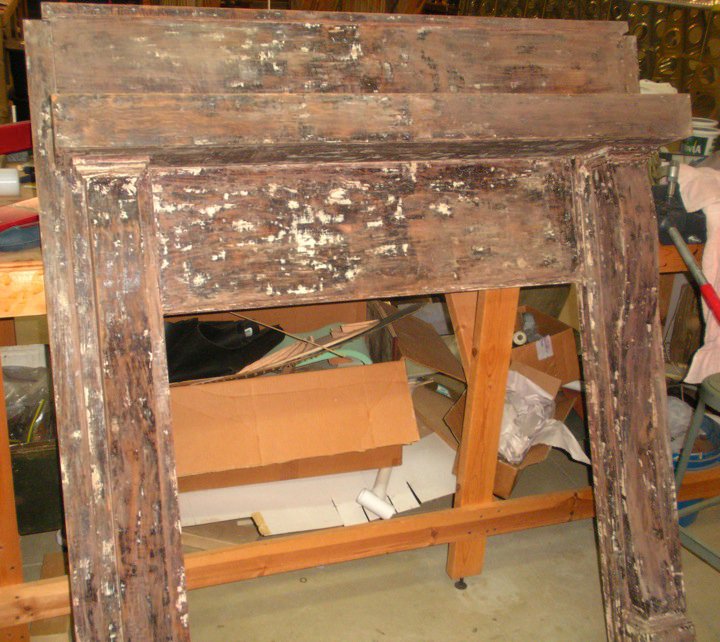 I found this old mantle for $50 and refinished it. 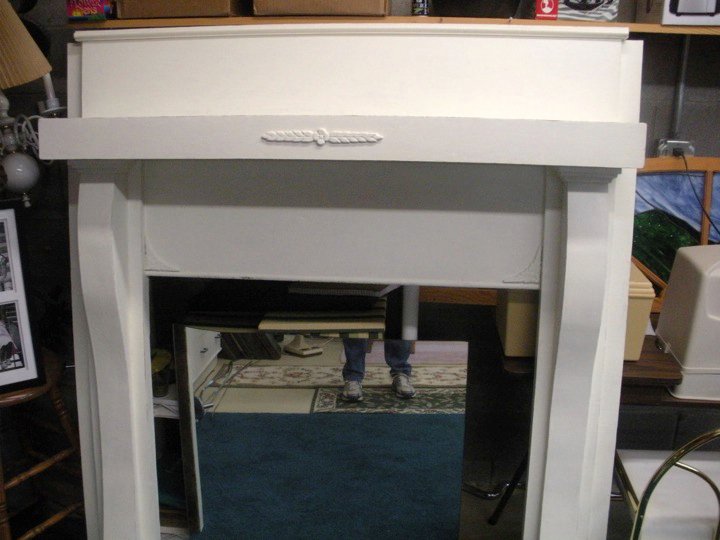 Here is the AFTER photo. It will be used in the room called the Fourth room which is white decor.

This weekend, we are headed to the Indianapolis 500.  We will meet Jack’s two brothers there.  His younger brother, George writes a popular blog with all of the facts you would ever want to know about the race.   Maybe when we get home, it will stop raining and I will have the earwig “Back home in Indiana”  (sung by Jim Nabors) in my head!

This is way too funny! I needed a good laugh this morning! Be Careful!!

The mantle is beautiful. I'm glad I didn't know how dangerous it was on that ladder. Thank goodness when I read that he had finished cutting those whatever things with a chain saw. I certainly know what you mean about earwigs. I get them every week after choir practice and it lasts till the next week. I am always so glad when I get a new tune in my head. When I wake up in the middle of the night the tune is still there going around in my head.

It was a Bonding Experience | bedfordlandings on June 13, 2013

[...] week, Jack decided he needs that mantle after all that I blogged about a few weeks ago.  He needs to frame in for it and the propane folks need to install the gas [...]