Being a Rocker at Age 65! How these Innkeepers Stay Involved

Posted on December 30, 2019 by Bedfordlandings 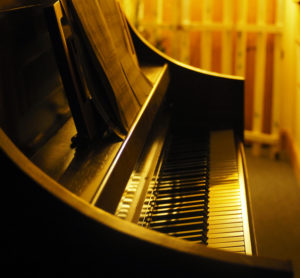 When I was in first grade, I started taking piano lessons at 8:00 each morning before school.  I had to walk from my house to the piano teacher’s house for this early lesson. I took weekly lessons for 9 years.  By 9th grade, I  let piano go in favor of other developing interests.  Luckily I had developed the skills to read treble and bass cleft through piano.  In 6th grade, I started playing in the school band.  I was given a used clarinet and by 8th grade, my parents surprised me with a brand new clarinet for my birthday.  I was never first chair since Ted Smutz, Billy White and Ann Powley held down the first three chairs smartly. I generally sat on the second row, but first chair in the second row!

In 9th grade, I also started being interested in being the field conductor for the band.  That is similar to a drum major, but one who conducts a marching band on the field or in parade with white-gloved hands.  I went to a summer A.R. Casavant field conducting camp in Ohio and learned some great precision marching skills that I put to work.  I became field conductor for the 8thgrade band until my band director tapped me to be the Blacksburg High school band field conductor when I was in 11th grade.  We developed field routines, went to competitions (Bristol and Myrtle Beach among them), marched in parades played for pep rallies, and football games.  I LOVED this part of my high school years.  The band rehearsed as much as the football team practiced marching about 5 miles a day after school. 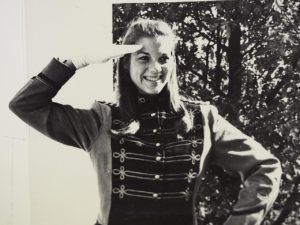 There was an abrupt pause in my musical fun right after high school as I attended college; eventually earning a doctorate, having two children, and moving several times during my career.  There was a musical pause (or rest!) until now.

NOW, I AM RETIRED and I can revisit some of the most fun I had in my life on a different level.  Retiring to Smith Mountain Lake, I joined the Lakeside Singers, a community chorus of about 50 singers.  Each year we rehearse weekly starting in March and culminating in two concerts the first weekend in June.  We have great fun making music together. 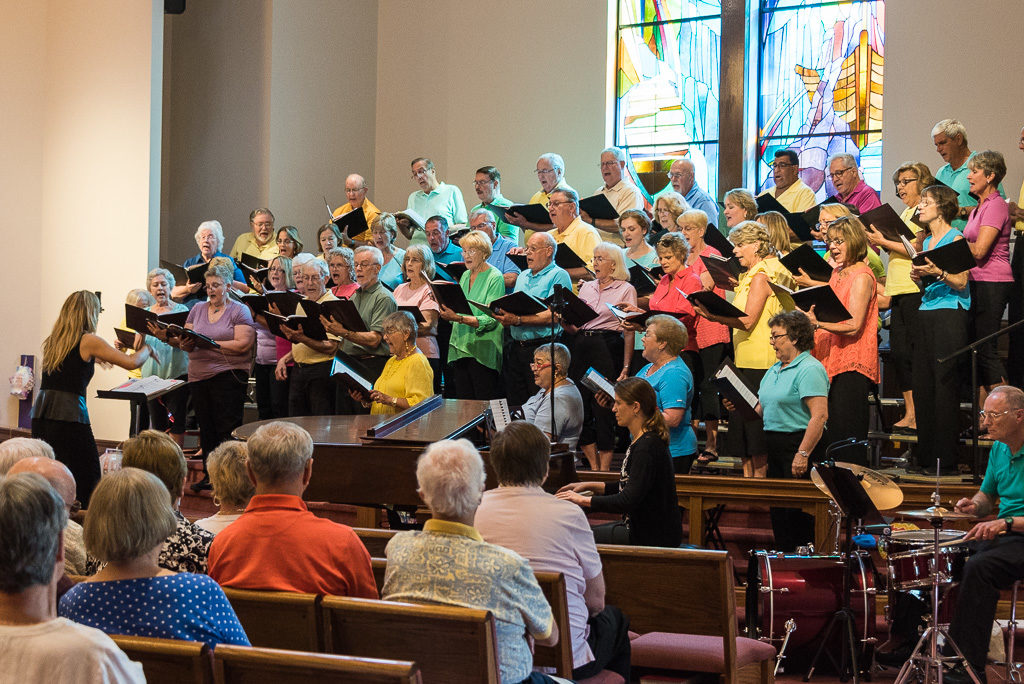 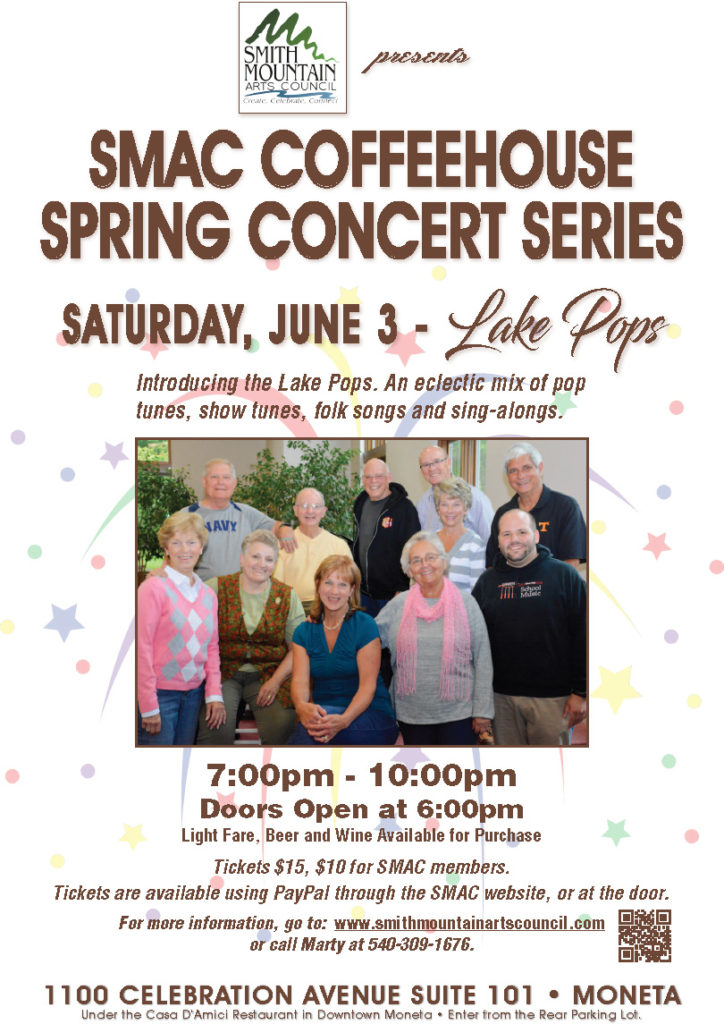 My husband, Jack, likened the Lake Pops show to a backyard carnival where all the kids performed and the parents watched.  That first year with the Lake Pops was indeed such a variety show but the audience had fun and we had fun.  So we tried it again.  This Lake Pop 11-person ensemble has now morphed into an 8-person band featuring 3 female vocalists, a male vocalist, a bass guitar, two lead guitars, a keyboard and a drummer.

Calling ourselves the Boomer Band, we play 50’s, 60’s and 70’s music for charitable causes. 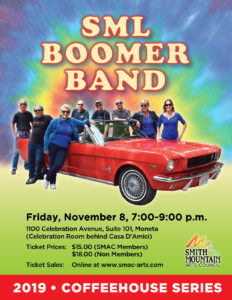 By playing a little Brown-eyed Girl, Under the Boardwalk and Take Me Home Country Road, one audience (May 2019) helped the SML Good Neighbors raise upwards of $20,000.  We next performed in the Fall of 2019 for a Smith Mountain Arts Council Coffeehouse.  Again the audience seemed to be having fun singing along with the familiar songs.  Our next gig is in February 2020 as a benefit for the Food for Kids organization putting meals into backpacks for needy children.

So here I am rehearsing again.  With a new SML Boomer Band show coming up in just 6 weeks, we will be rehearsing twice a week and have identified a handful of new songs to learn.  It may not be 5 miles or marching a day, but it’s hard to sit still and not bop to the fun music we are making even in rehearsals!  Can you be 65 and be a rocker?  Indeed! 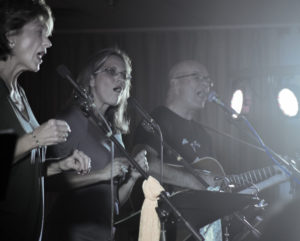 But what does that have to do with being an innkeeper?

This story is just a way to demonstrate that we have a life!  Many times we learn that guests thought that we were just sitting and waiting for them to arrive.  Sometimes we do wait and rarely do we make Friday evening plans because of guest arrivals.  We expect late arrivals on Fridays.  But we really appreciate it when guests let us know their arrival times.  Indeed we are dedicated innkeepers but we also have an active community life.

When we check in guests, we are in the moment!  We show people around the house, give them a map, discuss restaurant options, and answer questions. 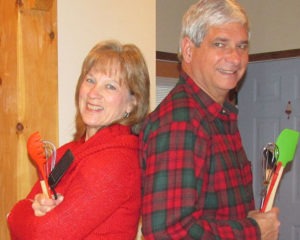 We arise about 6:15 and are in the kitchen by 7:00 preparing a gourmet breakfast.  We greet each guest and stay available throughout breakfast to listen, learn, and share.  It’s what we love about being innkeepers.

A singing innkeeper? Maybe not, but if you ask, Jack may play the bagpipes for you!! Come see us this winter! 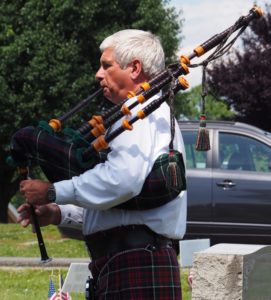 You’re awesome and still hope to get up there and enjoy your hospitality!🎉keep posting all your fun activities. And your performance schedule. Mcp

I just love these people! They are more than innkeepers, they are dear sweet friends! They are kind, generous, funny, talented and just a plain wonderful couple! Come stay with Jack and Karen and see for yourself!

We are performing February 7 and May 15 with the Boomer Band here at Smith Mountain Lake. This could be your chance to go ahead and come visit!

Dear friends, indeed! Great innkeepers, singers, bagpiper, published writer, airplane builder. . . such talent they have. They even take special requests for guests from those recommending their lovely Bedford Landings.

Thanks for the memories!! Karen, you tickled a lot of old psynapses talking about music and band! I too played trumpet from 6th grade up until my freshman year in college! I actually got a music scholarship that paid my tuition my first quarter, $85!! That was a long long time ago as the price of tuition says! High School band was so much fun, and the marching was what made Friday night well worth the effort! I too competed in competitions in Bristol as I am from Kingsport! Thanks for another great news letter, I always look forward to the next one as I never know what to expect or the topic of the letter!! And thanks to the best Innkeepers in Virginia!!

Phil- YOU WERE OUR FIRST (ever) guests and I love that you are still following us! Aren't memories great? Karen