Bedford Landings Innkeepers and the Pandemic

Is this a dream?

Didn’t you always think that living through a pandemic was only something described in a sci-fi movie, a Dean Kootz novel, or (the locust swarm story

) the Bible?  But each day that I awaken, first I am thankful to be well …and second, I remind myself that we are still self-quarantined.

Every day I start my day at 7:00 by watching the national news.  I have continued this routine for these past few weeks. Alternatively, Jack basks in the newness of the day from the hot tub on our deck.  During the pandemic, I have grown increasingly stressed and he keeps saying, “I am kind of enjoying this isolation.”  Granted, he is more introverted than I am, but what was the difference in his perception and mine?  The NEWS!

In my previous (paid) work, I advised stressed families through disasters and the number one piece of advice was to limit TV!  So, yesterday I heeded my own advice. I did not start my day with the news.  I also added a brisk walk.  Amazingly my spirits lifted!  I won’t be in the dark having missed the latest reports because I am confident it will also appear on Facebook!

This House is Clean!

Reflecting on the past few weeks, I am guilty of having passed through several of the phases that families experience when they are stressed after a disaster (see box).  That disaster could be a house fire, a tornado, or even a self-isolating pandemic.

We have keep our house clean in case we have a guest who calls at the last minute to book a B & B room.  And we were ok when the rule was limiting gatherings to no more than 100 people.  We could deal with that.  We had a Murder Mystery planned with 39 ticket holders.

During the Heroic phase, we cleaned.  We disinfected every headboard, counter top, railing, sink, faucet, doorways, horizontal and vertical surfaces were.  We were ready for guests and the Murder Mystery.  We practiced elbow bumps and our adrenaline was pumping. 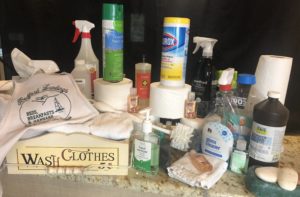 No more than 50 People
Then the news announced tat  gatherings of more than 50 were disallowed.  Being President of the Smith Mountain Arts Council (SMAC), I was faced with holding a discussion with the Board about cancelling our next coffeehouses and our April photo show.  The Boomer Band canceled a show, the churches closed, restaurants started offering only carry out, and traffic came to a halt. 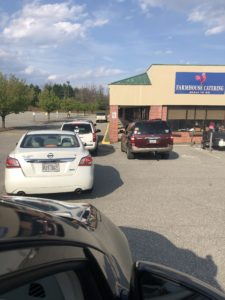 These actions were novel enough to be a bit fun in the challenge of how to interact from a pace of 4-6 feet.  This was the Honeymoon phase.  People helping people.  The young were grocery shopping for the old; neighbors were gifting toilet paper to each other,  and we all called old friends to just extend greetings and socially interact.

No more than 10 People requires ZOOMING
During this Honeymoon phase, Jack and I joined several Zoom video meetings.  We hear that Zoom stock has risen exponentially (from $36 per share to $151 per share) as people realize how this virtual space can serve as a great substitute for face to face meetings since we can no longer convene more than 10 people.  There are funny things about Zooming.  No need for fancy shoes or pants since you are only seen from the waist up. And you gotta’ get the camera angle right or y 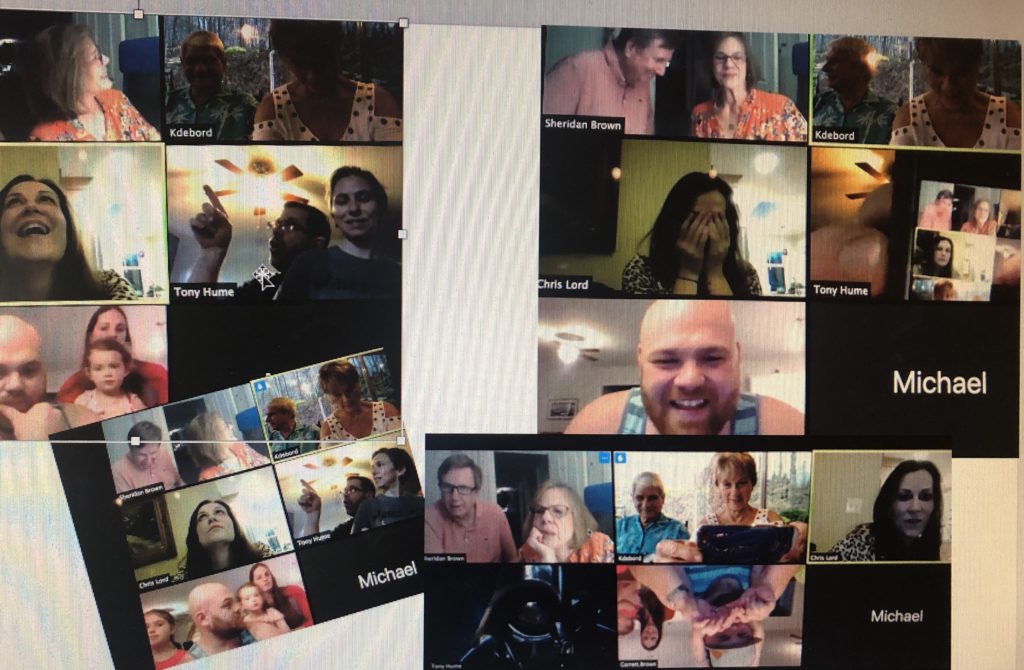 ou might convey oversized nostrils and multiple chins!  We are involved in a community effort soon to be unfolded to bring people together virtually using Zoom.  My crazy family tried to “zoom” recently. It was just like our family in reality; mass confusion and hysteria!

Innkeeping
Then the B&B cancellations started coming. In two weeks, we have had 8 cancellations (in our 4-room inn) and refunded each of their $100 deposits.  We have postponed the Murder Mystery until May and only hope we can hold it then.

Several people have called seeking a spring break location for their kids or a get-away with their mate.  But where have these people been?  Might they be carriers of the virus?  We determined not to host any guests until April 1 and then re-evaluate. Ugh!

Living in our House and Yard!
On March 11, I wrote COVID-19 memos for three different organizations including Bedford Landings. 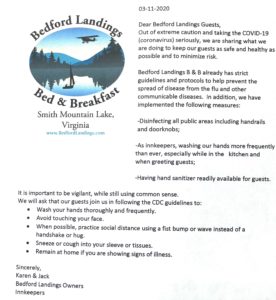 After cancelling reservations and getting used to staying home, we started living in our house; meaning we aren’t as conscientious about picking up and picking-up after ourselves.
We started making a few crafty type things, we started re-doing the lattice work under our exterior decks, we donned facial masks up to muck out our water feature (called Marthy’s Creek named after my mom). 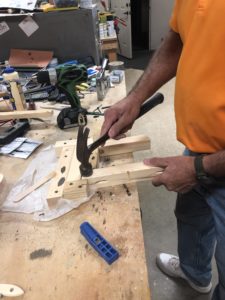 About March 9, we got baby chicks.  We wanted to integrate them into our 4-chicken flock.  The gramma chickens are about three years old now.  They have to grow their feathers before being outside. But now the chickens have started growing.  They have been living in the laundry room in a large tote with a heat lamp. I have now named them Stinky and Stanky. 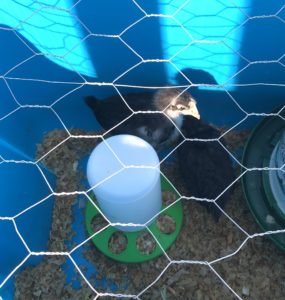 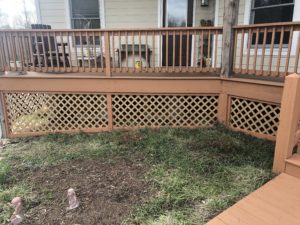 With the chickens and our messy projects, there are chicken shavings, mulch. and sawdust tracked through the house.  We have not been upstairs to the guest level so our guest room are still clean and sanitized.  But next week, we will clean the main level again and hopefully these chickens will have grown enough feathers to be put outside.  We are almost done with the lattice work and we hope and pray that life will go back to normal soon. 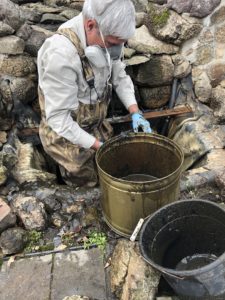 Jack mucking out our water feature. 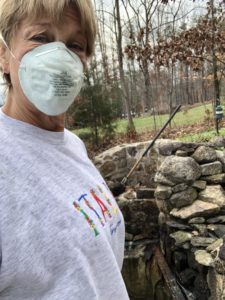 It’s a messy job that has to be done!

Stress
The stressful part is the unknown.  We have lived through the fun part of a disaster.  The heroic and honeymoon periods are almost over.  The first two are the shortest stages of the succession. Now reality creeps in.  During hurricane disasters, people begin to realize that “the gov-ment” (FEMA) cannot save them. With the pandemic, people must realize that an infusion of $500-$2000 won’t last a long time.  If we must extend the social isolation, quarantines, and elbow bumping, the stress level will rise.  When recovery is lengthy, people get desperate. Domestic violence generally rises and depression sets in.

Advice: Be aware that there is an underlying tension and that the longer the necessary isolation continues, the more intense the stress.  What projects can you do at home in terms of reorganizing sorting, painting, cleaning.  Go outside and bike or walk. Keep children in a routine, revive your family game nights, and gather to discuss household tensions before they have a chance to swirl out of control.

Going Forward
As for us, we recognize prayer is an important daily ritual.  There are many ways to pray and just be silent and think about the many gifts and goodness in our lives.  Jack has played bagpipes for a friend’s fly-over memorial service, played pipes for our church virtual newsletter, and played pipes for the taping of the Sunday church service.  Weirdly enough the church service recording was lost.  But here is Jack playing bagpipes at Edenton Street UMC in Raleigh. (CLICK HERE).  The 2009 video quality is not as good as today’s video quality would have been, but an impressive sound nonetheless. And he can still wear that same kilt!

Stay well, stay at a safe distance, make wise decisions about social interaction and hang in there! Look for the rainbows! 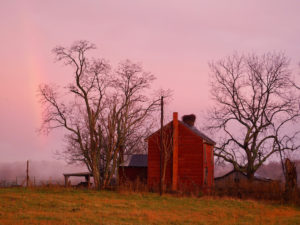